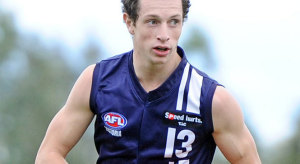 Three big matches are scheduled for Saturday TAC Cup Country Round, to be played consecutively at Bendigo’s Queen Elizabeth Oval.

The Bendigo Pioneers host Gippsland Power in the first encounter at 10am.

The North Ballarat Rebels will then be out to claim their first win of the season when they take on the Murray Bushrangers at 12.30pm.

The final match on the card sees the undefeated Geelong Falcons meet the highly fancied Dandenong Southern Stingrays at 3.00pm

With all six country regions in action, it means players will be travelling from far and wide for a huge day of TAC Cup action.

Vic Country high performance manager Leon Harris said it was a huge opportunity for players to press their case for selection in the Vic Country squad to compete at the NAB AFL U18 Championships.

“We’ve got our first trial game next weekend and a good performance tomorrow could be the difference between being selected,” Harris said.

“There is always huge interest from AFL recruiters at these types of days with the ability to watch the best all on the one day.”

Harris said there were a host of rising stars to keep an eye on with every side containing players of significant interest.

It’s a crucial game for both the Pioneers and Power with both sides securing one win and one loss from their first two games.

The Pioneers will rely heavily on the strength of their back six with Trent Bacon, Jordan Mangan and Josh Cakitaki in stellar form.

The Power will look to forward Ben Kearns to show the way after the exciting forward bagged five goals playing for Casey as their 23rd man in the Peter Jackson VFL last weekend.

Aaron Heppell, the brother of Essendon’s Dyson, is another who has impressed in recent weeks, linking up well through the midfield with Nathanial Paredes.

The Rebels go in search of their first victory of 2013, knowing they’ll have to be at their best to overcome the Bushrangers.

The Bushrangers proved too good for the Pioneers last week and with the likes of Nick Holman and Bryden Squire firing, will be looking to make it two wins in a row.

Skillful on-baller Jarman Impey will be another to watch in his second match after overcoming a knee injury.

The Bushrangers will also be hoping for big things for Nathan Drummond who measured in the top 5% for all categories at the High Performance Testing Camp.

The Geelong Falcons have been one of the form teams of the TAC Cup so far this season and will be out to notch their third straight win when they face the Stingrays on Saturday.

Speedy wingman Darcy Lang will be one of the key men the Stingrays must stop if they hope to come away with the points.

Lang’s run and carry has been one of the features of the Falcons’ play in the opening two rounds and he will again be suited to the wide expanses of the QEO.

Zaine Cordy, the brother of Bulldogs ruckman Ayce, and Hugh Goddard, the cousin of Essendon star Brendon, will be under scrutiny from AFL recruiters.

The Stingrays have their own array of talent, headlined by small forward Clay McCartney.

The small forward has seven goals after two matches and has proved an ever present danger for the Stingrays.

Jordan Bastinac, the brother of North Melbourne midfielder Ryan, and classy half forward Nathan Gardiner will also be ones to watch in the Stingrays’ squad.