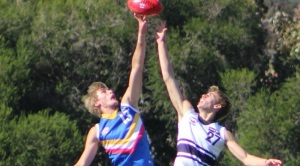 A dominant Eastern Ranges outfit defeated the Northern Knights on Saturday, leapfrogging the Knights on the ladder in the process in to sixth spot.

The 46-point final margin threatened to blow out even further, as the Ranges made Box Hill their fortress, to the delight of the crowd, as Davis Harrigan reports.

Grit, errors, and changes of momentum peppered the majority of the first quarter, but it showcased the start of a five goal haul for Ranges small forward Andreas Roth. A solid defensive line was the key to blocking the Knights path to goal, but Kyle Langford and Matthew Haynes eventually found a way to break the shackles. Ranges players Aaron Bond and Ben Cavarra were both quick through the middle to help set up forward 50 entries, as well as kicking a goal each themselves. The six-point quarter time lead for the Ranges gave no indication of what was to come.

After quarter time, the Ranges found an extra gear and booted away with a five goal to nil term. Michael Apeness was outstanding, kicking two goals and providing a target in both defense and the forward line. Ranges forward Christian Petracca began to make his mark on the game in the second term, eventually finishing with three goals, and Kyle Staples began to help with the forward drive, finishing with one goal.

The Knights were left stunned at half time, and despite a six goal third term, could not find the legs that they needed to ultimately make it back into the game. Young Jessie Tardio helped turn the tide in the third quarter with two goals (finishing the game with three), and he was well supported by Lewis Glasgow. Langford and Sam Switkowski were gallant for the Knights as they sought to create opportunities, and while they found them in the third quarter, the likes of Ranges defender Sam Gibson, who worked tirelessly all day, and Daniel Welsh kept the level of play high.

Ranges coach Darren Bewick very pleased with his sides performance after the game.

“Nothing much will change throughout the year.

“The boys know that when they understand and play their role…they get the results,” Bewick said.

“They’re a very talented group, and wanting to do well for each other is something I’m very happy with.”

“I thought Andy played his role a lot better today as a small forward, and Connor O’Sullivan battled really well in the ruck.”

Kyle McDonald was the Knights best in defence, while Haynes was the other multiple goal kicker for Northern with two.

The match showed positive signs for the Ranges, who after four rounds have a 2-2 win loss record. They travel to Wangaratta next week to battle the Murray Bushrangers, while the Knights will play the Bendigo Pioneers at Preston City Oval.