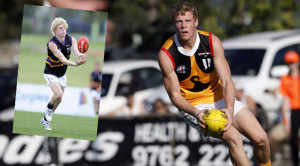 The pair finished tied on 14 votes, one ahead of Geelong Falcons on-baller Lewis Taylor.

And while Taylor, and the likes of James Tsitas and Patrick McCartin, grabbed the headlines with blistering individual games, Jones and Holman won plaudits for their consistency.

Victoria Country High Performance Manager Leon Harris said the duo emerged as two of the side’s most important players during the NAB AFL U18 Championships.

“This was the first taste of Vic Country action for both Nick and Zak, having missed selection at 16-year-old and 17-year-old level,” Harris said.

“To be recognised with the MVP award is a fantastic achievement and they should be proud of what they were able to achieve.”

“Their performance proves that guys can come in as top-agers without a big reputation and have a real impact.”

As a lock-down defender with an ability to still win plenty of the ball, Jones polled in all five games.

The brother of Melbourne gun Nathan Jones, the 18-year-old stepped up over the Championships to be a one of Vic Country’s defensive pillars alongside Darcy Gardiner.

“Zak, as proved by his selection in the All-Australian side, was a standout over the five games.” Harris said.

“His ability to win one-on-one contests was impressive and to keep that form up over the six week carnival is a testament to his preparation.”

“Playing so well in the championships against some of the best forwards in the country has given him enormous confidence, and he’s been able to move into the midfield with the (Dandenong) Stingrays and continue his development.”

Holman was equally impressive, polling in four of the five games as a hard-nosed on-baller.

“His consistency was outstanding,” Harris said.

“Against South Australia, the eventual champions, he was one of the few guys who were able to hold their own against a high quality midfield.”

“He had something like 14 touches to half time and proved he could match it with the very best.”

Holman will be hoping he can find some similar sort of form this Saturday, when the Bushrangers attempt to lock up a finals berth with a win against the Northern Knights.

The Victoria Country Academy is proudly supported by Dairy Australia and the Legendairy campaign.