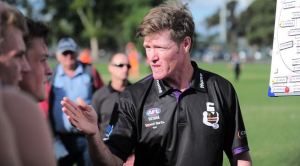 This Saturday night the Murray Bushrangers will take on the Eastern Ranges in the first TAC Cup game played under lights at the Norm Minns oval in Wangaratta.

The Wangaratta Council, along with the local football community, have played a big role in the development of the Norm Minns Oval into a quality football facility, enabling night matches to be played.

The Bushrangers, who have been in great form so far this season – sitting in fifth spot with two wins - will have a big home crowd behind them as they go up against the reigning premiers in a great display of TAC Cup football.

Murray coach Darren Ogier said it is a great opportunity for the side to showcase its talent to the local community.

“That is one of the best things about the night game, that all our squad are able to come to the game, as well as local coaches and friends.

“It will be great for many in the region to come along and see some of the best local talent on show, and highlight the standard of the TAC Cup competition,” Ogier said.

“It is really exciting for the team, as it is the first time we have had a night game here at our new facility and we are certainly ready to go.”