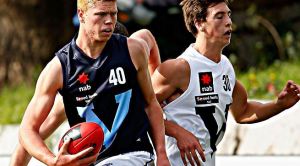 The final squads have been announced for the Vic Country and Vic Metro teams for the remaining rounds of the NAB AFL U18 Championships.

With both Academies announcing a squad of 50 prior Round 1, a trial game after last Sunday's U18 Championship match - which saw Vic Country victorious by 15 points - gave players one final opportunity to impress selectors.

The squads have now been reduced to 40, which will remain for the rest of the Championship matches.

Round 2 kicks off on Saturday May 31 when Vic Metro heads to WA, while Vic Country will head across to SA on Sunday June 1.

Click the links below to view the Vic Country and Vic Metro final squads.