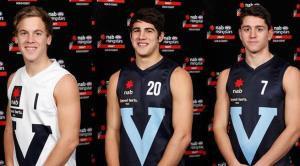 While the curtain was drawn on the NAB AFL U18 Championships back in early July, last week the award winners for AFL Victoria’s Vic Metro and Vic Country U18 Academies were announced.

Thanks to the support of Dairy Australia, both U18 Academies named a Legendairy award winner. Country’s best and fairest winner Jack Lonie, and Metro Coaches Award winner Jason Castagna both receiving that honour.

In his five NAB AFL U18 Championship games, Castagna averaged 14 disposals a game at 73% efficiency as a small defender.

As AFL Victoria High Performance Manager Anton Grbac explained, the award was measured by the coaches impression of a player both on and off the ground, their ability to take on instructions, to be a team player and perform consistently.

Castagna ticked all the boxes for this award.

“Jason for us was the epitome of competitiveness, a team player, was prepared to back his ability, followed instructions and is a very well presented young man when you speak to him.

“He is very humble and also grateful to be involved, and took the opportunity (playing U18 Championships) as something that he wanted to savour,” Grbac said.

While he played the majority of the Championships in defence, Grbac said he made the most of opportunities when tested in other positions.

“When given an opportunity up forward and on the ball he contributed and showed signs of engaging in the game.

“That is what impressed the coaches, as regardless of what role you gave him, he would step up to the plate.”

Also announced on the night was the Vic Metro best and fairest, with Eastern Ranges’ Christian Petracca completing a clean sweep of the U18 Championship awards by taking out the title.

Petracca added the Vic Metro best and fairest to his Larke Medal for the best player of the Championships, and his Metro MVP to highlight his dominance during the 2014 matches averaging 25 disposals a game.

“He has now become a player that is not only able to show that he is a potent match winner up forward, but has genuinely become a midfielder, and can make a big difference at stoppages in particular,” Grbac said.

“In terms of developing and improving in 12 months, he was a very good forward but wanted to become a midfielder, and it looks like what Christian wants to do, and puts his mind to in general, he achieves.

“That is a quite an impressive trait and he showed it during the Championship as he was always in the top possession winners, and really made a difference around the ball; showing competitive efforts not only offensively, but defensively as well and played a strong leadership role within the group.”

“He was the barometer for Vic Country in the Championships, as when he was up and going we were up and going.

“He did not play nationals at U16 or 17 level, so his ability to come in having not played in the Championships before and perform as he did was a credit to how hard he worked,” Harris said.

Lonie averaged 15 disposals a game and kicked nine goals, with his biggest haul against WA in Round 4.

“He was hard, he was tough and could always make something out of nothing and his finishing skills were very good.

“He showed during the Championships that he could play in the midfield, as well as his customary small forward role,” Harris said.

“His form was rewarded with an invite to the NAB AFL Draft Combine, so I think he is now seriously on the radar for a player of his size which is great.”

AFL Victoria would like to thank Dairy Australia for their support of the U18 Academies in 2014.

To find out more about how milk can help your recovery, visit:

See below the awards winners in action in the NAB AFL U18 Championships, plus a number of Academy member pass on their thanks to Dairy Australia: