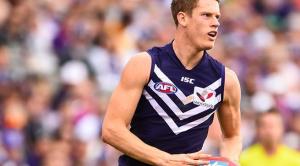 The 21-year-old Fremantle forward had a break-out match in the Dockers’ 58-point win over the Brisbane Lions at the Gabba with 22 disposals (14 kicks and eight handpasses), four tackles and a goal.

Matt was selection 11 in the 2012 NAB AFL Rookie Draft and was elevated to the senior list as selection 70 of the 2013 NAB AFL Draft.

Fremantle coach Ross Lyon said Matt has made the most of his opportunities this season.

“Matt is off our rookie list and is continually working extremely hard in all areas of his game,” Lyon said.

“He has earned his place in the team with some very consistent performances at Peel Thunder and we look forward to him continually improving at Fremantle.”

Matt was recruited from the Murray Bushrangers, but played his earlier football with Bright Junior Football Club and Myrtleford Football Club.