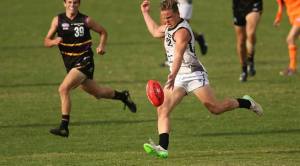 No teams remain undefeated after the completion of Country Round, with Murray Bushrangers and Oakleigh Chargers suffering their first defeats of 2015.

At a triple header of games at Bendigo’s Queen Elizabeth Oval, Geelong Falcons kicked off proceedings with a close one point over Gippsland Power. Baden Remmos with the highlight of the game taking a big grab in the third quarter.

Dandenong Stingrays opened with a strong five goal to nil first term to set up their 49-point win over Bendigo Pioneers, while Sandringham Dragons defeated Oakleigh Chargers – the Chargers first defeat since Round 18, 2014.

See below all the Country Round highlights.