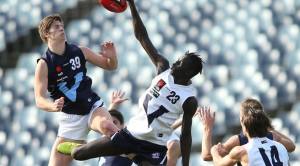 A blistering start and a dominant back line has helped Vic Country defeat Vic Metro 14.14 (98) to 9.9 (63) at Simonds Stadium in Geelong and remain undefeated after three rounds of the NAB AFL U18 Championships.

It was the second time Country had accounted for Metro at the Championships after pulling off a thrilling five-point comeback win at the same venue in Round 1, but this time it was the Country boys who came out with all guns blazing.

Country couldn’t put a foot wrong in the first 13 minutes of play, quickly booting six unanswered goals while keeping the ball almost solely in its half of the ground.

In fact, Metro outscored Country by seven points in the final three quarters, underlining how vital Country’s savage first-term burst was to the result.

After goals to Calder’s Hisham Kebatieh and Oakleigh’s David Cuningham to start the final quarter, Metro was within 29 points.

However, Country steadied. Collins continued to be the thorn in Metro’s side as they moved the ball forward, consistently denying his undersized opposition the chance to score.

Others to star for the victors included Dandenong’s Daniel Capiron, who was superb off a wing and half-back with 22 disposals and a goal, Bendigo Pioneer Thomas Cole (19 disposals, one goal) and North Ballarat Rebels Jarrod Berry and Darcy Tucker (both 26 disposals).

Josh Schache (Murray Bushrangers), Ben Ainsworth (Gippsland Power) and Jy Simpkin (Murray) all finished with two goals as Vic Country made it three wins from three games ahead of a clash with South Australia at AAMI Stadium in Adelaide on Sunday.

The winless Vic Metro team next travels to Domain Stadium in Perth for an encounter with Western Australia on Saturday.

Division One-Round Four matches to be played next weekend: