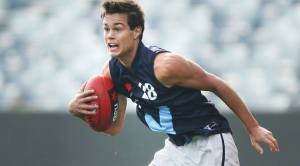 Oakleigh Charger Jack Silvagni’s six goals helped Vic Metro claim its first win of the NAB AFL U18 Championships with a 74-point defeat of Western Australia at Domain Stadium in Perth, 19.7 (121) to 7.5 (47).

In a welcome boost for Metro, Silvagni, Clarke and Gresham all returned to the team after missing last week’s 35-point loss to Vic Country.

Others to come back into the squad and perform impressively were Eastern’s Bryce Batty (24 disposals, five clearances) and Sandringham Dragon Harley Balic (20 disposals, nine marks).

Metro bounced out of the gates in the first quarter, kicking the first four goals of the game before WA hit back with two of its own to head into quarter time 11 points in arrears.

But Metro flexed its muscle in the second term, booting 5.5 to just two behinds to essentially end the match as a contest.

The Western Australians then opened the second half with three consecutive goals to get within 26 points at the 11-minute mark of the third quarter, but Metro answered again with 10 of the last 12 goals of the match – including four to Silvagni – to seal their maiden victory of the Championships.

Vic Country plays SA in the top of the ladder clash on Sunday - follow @TACCup from 11:30am for live updates.

The Western Australia v Vic Metro will be broadcast by FOX FOOTY (Channel 504) on delay, Sunday, June 14 at 11am EST.