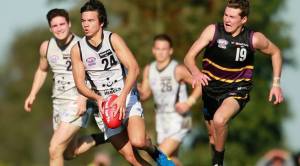 The TAC Cup country teams continued to demonstrate their strength in Round 10, with North Ballarat, Dandenong, Geelong and Murray occupying the first four spots on the ladder and the Bendigo Pioneers finally celebrating their first win of 2015.

The events of Round 10 ran parallel to the Vic Country representative team stamping its authority on the NAB AFL U18 Championships by beating South Australia in Adelaide.

Closer to home, two of the biggest highlights from the weekend’s action involved country teams sitting at opposite ends of the ladder.

In Round 10’s heavyweight main event, the North Ballarat Rebels and Murray Bushrangers faced off at RAMS Arena in a top-of-the-table clash that went down to the wire.

The Rebels bolted from the gates with a four-goal-to-nil opening term before the Bushrangers fired back to take a six-point advantage into half time. But in a tense second half, North Ballarat reclaimed the lead and held on in tense circumstances to triumph by four points, maintaining its grip on top spot.

Meanwhile, the winless Bendigo Pioneers finally broke their 2015 duck with a nail-biting come-from-behind victory over the NSW/ACT Rams at Queen Elizabeth Oval.

The Pioneers trailed at every change (including by 17 points at half time and by seven at three-quarter time) but put their noses in front when it mattered for a memorable three-point win.

Two other country teams, the Dandenong Stingrays and Gippsland Power, engaged in a high-scoring duel at Shepley Oval that ended in Dandenong claiming a 21-point victory and second position on the ladder, while the Geelong Falcons played out a draw with Tasmania at Avalon Airport Oval to move ahead of Murray into third spot.

Tasmania ended its involvement in the 2015 TAC Cup undefeated with three wins and a draw, while Northern Territory completed its campaign with one win and one loss after accounting for the Northern Knights by 11 points in Darwin on Saturday.

In other matches, Queensland defeated the Calder Cannons by 27 points, the Oakleigh Chargers ran over the Sandringham Dragons by 16 points and the Eastern Ranges did it comfortably against the Western Jets by 32 points.