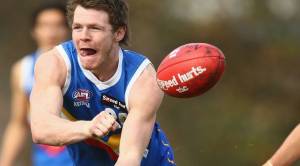 The races for the minor premiership and the last spot in September’s finals series are well and truly alive after Round 16 of the TAC Cup.

The Dandenong Stingrays drew level on points with the top-of-the-table North Ballarat Rebels after defeating the Oakleigh Chargers by 42 points at Shepley Oval.

The Chargers may have been sitting in the top four before Saturday’s match, but the Stingrays blew their quality opponents away with five goals to one in the second quarter to set up the win.

The Rebels have held top spot since Round 7, but in giving up a 37-point half-time lead to lose by 13 points to the Gippsland Power at Morwell Recreation Reserve, they opened the door for Dandenong to swoop in the last two rounds of the season.

Meanwhile, the finals hopes of the Sandringham Dragons are still alive after they accounted for the Western Jets by 35 points at Trevor Barker Beach Oval.

The Dragons are one game and percentage behind the eighth-placed Calder Cannons with matches against seventh-placed Gippsland (Morwell Recreation Reserve) and the fourth-placed Eastern Ranges (Rams Arena) to come.

Sandringham will need to win both those games and hope Calder loses both its clashes with North Ballarat (Eureka Stadium) and bottom-of-the-ladder Western (Rams Arena).

The Cannons had a chance to sew up their spot in September against the third-placed Murray Bushrangers at Wangaratta Showgrounds, but couldn’t convert a three-point lead at the last change into the four premiership points, losing by 20.

In Round 16’s other matches:

-      Eastern recorded a big 124-point win over the Bendigo Pioneers at Box Hill City Oval to boost its percentage and grab fourth position from Oakleigh; and

-      The Geelong Falcons kept themselves even on premiership points with Eastern and still in the race for a top-four spot by beating the Northern Knights to the tune of 52 points at Simonds Stadium.

12 - Blake Hardwick has all but sewn up the 2015 TAC Cup goalkicking title after snagging 12 goals for the Eastern Ranges in their big victory over the Bendigo Pioneers. The 181cm forward has a 16-goal lead on Dandenong Stingray James Freeman with two home-and-away games to play and has now booted bags of 12, 10 and eight majors this season.

5 - So how did the Gippsland Power overcome the ladder-leading North Ballarat Rebels on the weekend? Well, they simply didn’t allow the Rebels to get their hands on the ball. The Power had five players collect more than 20 disposals – Aloysio Ferreira (27), Connor Ambler (26), Jackson McMahon (26), Nash Holmes (25) and Kade Renooy (25) – while North Ballarat didn’t have any.

35 - Clayton Oliver was named Murray’s best player in the Bushrangers’ comeback win against the Calder Cannons and it’s no surprise why. The Mooroopna product collected 35 disposals (14 more than any teammate), had 12 clearances (eight more than any teammate) and drove the ball inside 50 six times (an equal team high).