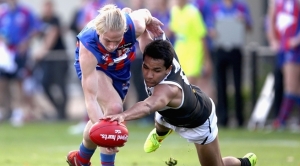 Grand Final berths will be on the line when Dandenong meets Eastern and North Ballarat faces Oakleigh in Preliminary Finals on Saturday.

A theme of both teams’ finals campaigns so far has been forward line efficiency. In the Qualifying Final, Dandenong had the ball 30 times less than Murray and lost the clearance count, but ended up with six extra scoring shots in a six-point win – registering a score from over half its entries inside 50. Eastern, meanwhile, has capitalised on early inaccuracy in front of goal from Calder (in the Elimination Final) and Geelong (Semi Final) to build scoreboard pressure.

Pressure on the opposition’s midfield will be crucial in allowing each team’s defensive group to foil or cut off forward entries. The Stingrays have the height to do so with Jacob Weitering and Kieran Collins marshalling the back line, but the question will be how their smaller teammates counter versatile mid-sized Ranges forwards such as Blake Hardwick and Jayden Stephenson, who have been dynamic in the finals series so far.

Up the other end, Jack Maibaum – who kept Geelong’s Charlie Curnow in check last week – will lead a defence aiming to control the influence of bigger forwards such as Travis Young (four goals against Murray), James Freeman and Harrison Prior.

For the record, Dandenong won by 21 points the last time these teams met in Round 7 at Box Hill City Oval.

North Ballarat had Oakleigh’s measure twice this season, most recently in the final home-and-away round at Eureka Stadium. The Chargers were within three points at the last change in Round 18, but the class of the Rebels told in the end as they powered to a 34-point victory.

As has often been the case this season, stars such as Jacob Hopper and Darcy Tucker stood up that day, while back in Round 6 at Warrawee Park, it was Josh Webster and Yestin Eades who helped North Ballarat to a 28-point win. Against Geelong in the Qualifying Final, four goals from Daniel Rioli and three from Joel Cowan were crucial in North Ballarat’s thrilling comeback victory and further demonstrated how many potential Rebels match-winners Oakleigh will have to be mindful of this week.

The Chargers aren’t lacking in that area either though, boasting a deep midfield including stars of this year’s finals Kade Answerth, Pat Phillips and David Cuningham, as well as a defence that restricted Gippsland to seven goals in the Elimination Final and Murray to nine majors in last week’s Semi Final. Jack Firns provides the defensive wall, while Lachlan Byrne-Jones and Harvey Hooper bring the rebounding drive.

This one will be a showcase of talent all over the park.