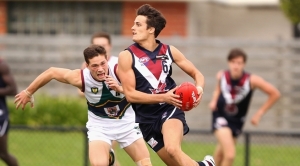 Harley Balic has said his thanks to the game of basketball and now he’s moving on.

The versatile Sandringham Dragons 18-year-old says his biggest footballing strengths – spatial awareness and athleticism – have transferred across from his time as a basketballer.

But his first sporting love – which has taken a back seat to his football ambitions since early in 2014 – also left a physical legacy that returned to haunt him during the 2015 season.

Balic was unable to complete any physical testing at the recent NAB AFL Draft Combine due to a second bout of surgery on the scaphoid bone in his wrist, performed when it became clear there was a strong chance the Dragons wouldn’t make the TAC Cup finals.

“I originally did my wrist about two years ago playing basketball,” Balic explained at the Combine.

“I ended up re-doing it (this year), so I got the screw that I originally had in there taken out and two new screws put in.

“I played most of the season with it niggling and being a little bit sore, but it came to a time when it was right to get it done – Sandy weren’t making finals, so it was beneficial for me to do it with two or three rounds left.

“(The surgeon is) pretty happy with how everything went and he’s pretty certain these two screws are going to be pretty sturdy, so hopefully there’s going to be no more to do with the wrist.”

There’ll be no more sneaky hoops being thrown on the side, nor does Balic keep up with the fortunes of his once-beloved Boston Celtics in the NBA.

Football is now the Parkdale product’s future, and his natural basketballing gifts see him well placed to go some way towards emulating the deeds of a fellow former basketballer, the current Collingwood captain.

“Growing up, I’ve always loved Scott Pendlebury... If I could show his attributes and do what he does, it’ll take me a little bit further,” Balic said.

“I think my spatial awareness and my athleticism are probably my two biggest traits as a footballer.

“Spatial awareness just gives me a few more seconds in traffic to make different decisions and weigh things up a little bit more.

“With my athleticism, it allows me to play both ends of the ground and roll into the midfield if I have to – I think it’s a handy trick.”

Balic showed the football world his tricks in 2015 across seven matches at Sandringham and five with Vic Metro at the U18 Championships.

After a self-confessed “shaky start” to the season under the weight of external expectation, the AFL Academy member found his groove leading into the national carnival.

Despite having never represented Vic Metro previously, Balic cast aside his nerves and produced a sparkling 27-disposal, one-goal performance in a heartbreaking five-point loss to Vic Country in Round 1 of the Championships.

“I’m particularly proud of my first round against Country in the carnival,” Balic said.

“I was lucky enough to get best-on and had a few touches early which gave me a bit of confidence, and I think without that start I might have been a bit shaky for a few more games, but I let my nerves go and got that first game out of the way.

“(But) I would’ve loved to have gone home with a win and it was just typical of Country to get that last goal (after the final siren to seal victory).”

Balic used the match to kick-start a stellar Championships campaign that saw him selected in the U18 All Australian team as one of only three Vic Metro players chosen, alongside Northern Knight Jade Gresham and Calder Cannon Nick O’Kearney. He also finished runner-up to Gresham in the Vic Metro best-and-fairest award.

His performances on the national stage proved that this multi-talented athlete is on the right sporting path.