Draft Watch: The bond of Ben and Harry 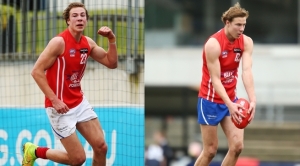 Ben and Harry McKay are hoping an interview at the recent NAB AFL Draft Combine is one of the last they’ll do together.

The Gippsland Power key-position players, as twins, have naturally been seen as a package while playing in the same teams throughout their junior careers.

But the 17-year-olds now feel it’s time to forge separate paths if they’re selected at the upcoming AFL Draft.

Ben has extra reason to feel that way, having only joined Gippsland in Round 10 of the TAC Cup season after choosing to play the first part of 2015 with local club Warragul – by which time Harry had already made a name for himself at the U18 Championships.

“I’d prefer to be at a different club... if we were to get drafted,” Ben said.

“I suppose I wouldn’t have to worry about him being a twin – you’ve always got that in the back of your mind so not having to do that, I suppose I’d benefit from that.”

“I agree with that,” Harry said.

“It’d give us a chance to develop as individuals instead of as twins – it’d probably be better that way.”

200cm Harry burst onto draft radars with some impressive performances for the national-title winning Vic Country team in June, starring in wins against SA in Rounds 4 and 5 as a forward line foil for the Murray Bushrangers’ star big man Josh Schache.

He also booted 19 goals in 13 games for the Power, including four in the Round 2 victory over the Dandenong Stingrays – a performance Ben thinks was his best of the season.

“He’s been pretty consistent I think,” Ben said of Harry.

“He knows where the goals are and is really dangerous around them, and he’s pretty agile and really athletic for a big man.

“Playing Vic Country is obviously a pretty big honour – he really enjoyed his time there and really values his Championship win.”

Harry thinks 199cm Ben’s best performance was in Gippsland’s Round 13 match against the Oakleigh Chargers, when he had 16 disposals and seven marks (including five contested) playing as a key defender.

Ben agreed with Harry’s assessment but wasn’t so sure about his brother’s thoughts on which position he’d be best suited to at the elite level.

“His biggest strength is probably his versatility,” Harry said of Ben.

“He can play forward and back (but) to be honest... I think he’s more natural down back.”

Ben, however, said he enjoys playing forward more than in defence, and indeed, he kicked goals in six of his 10 TAC Cup matches.

But regardless of his thoughts on where his brother is best suited to playing, Harry is proud of how far Ben has come in 2015.

“(It’s been an) interesting year I’d say for Ben, coming into the system late,” Harry said.

“He played only half a year for the Power but played a variety of roles and played some pretty consistent football. Playing for Warragul earlier on in the year, he played some good football there as well.

The McKays may not agree on everything, but clearly the strong bond of twins will be difficult to break, even if they end up at different AFL clubs.