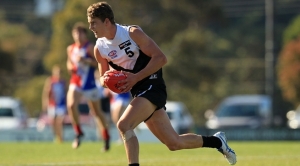 New senior coach Gerard FitzGerald takes the reins of a Rebels outfit looking to back up a minor premiership-winning 2015 campaign.

The Rebels set up last year’s minor premiership campaign with a 10-game winning streak between Rounds 3 and 12. However, after a thrilling 12-point comeback victory over the Geelong Falcons in a qualifying final, they lost to the Oakleigh Chargers by 32 points in a preliminary final.

Replacing David Loader as senior coach, long-time North Ballarat VFL coach Gerard FitzGerald returns to the Rebels after a previous stint in charge of the team in 2005-06. Talent Manager Phil Partington said FitzGerald had already introduced his new players to the “next level of football”. “Fitzy’s been a VFL coach having a high association with North Melbourne through an alignment,” Partington said. “He’s seen a lot of what the AFL clubs are doing, so you’ll see some AFL traits in the style of play Fitzy will bring.”

North Ballarat boasts a handful of players seemingly set to take that step to the next level come year’s end. Tall midfielder and club captain Jarrod Berry was named in last year’s U18 All Australian team as a 17-year-old and will be closely watched by AFL clubs. “There’ll be a little bit of pressure on Jarrod this year but he’s a very level-headed young man and works extremely hard,” Partington said. “He’s the ultimate professional.” Versatile tall defender Jarrod Korewha and ruckman Lloyd Meek – a former rower who has decided to concentrate on football in 2016 – are others Partington is excited to see in action, predicting Meek’s ability to go forward and kick goals would make AFL clubs take notice.

Small midfielder James Gow, ruckman Nicholas Hausler, midfielder Charlie Lee and the skilful Jacob Wheelahan have been invited back to the Rebels as over-age players. Partington said Wheelahan was enjoying his first full pre-season in three years and “his ability to make a difficult kick look easy has been a highlight”.

North Ballarat’s top-end talent won’t just benefit from the addition of FitzGerald to the coaching panel, but also the inclusion of Matt Battistello as high performance coach. This year’s Vic Country U16 coach will work with the club’s potential draftees on their personal and football development.

The Rebels open their season on Saturday March 26 against the Geelong Falcons at Simonds Stadium.

* Photo: Jarrod Berry in action for the North Ballarat Rebels in 2015