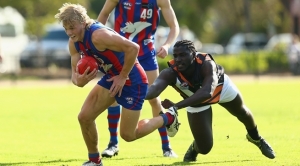 After four losses each to start the season, the Calder Cannons and Northern Knights notched their first victories in Round 5.

Calder faced the Gippsland Power at Morwell Recreation Reserve in a battle between two winless clubs with plenty of pride on the line.

The Cannons were the only ones to fire early though, with five goals in the first quarter from Karl Brown setting up a 25-point advantage that extended to 43 at half time. Gippsland fought back with four goals to one in the third term, but Calder steadied powerfully after three-quarter time to win by 52 points and leave the Power in last position on the ladder.

Northern also got on the board against Tasmania at Preston City Oval. Like the Cannons, the Knights did the damage early, keeping the Mariners scoreless in the opening stanza.

Northern established a 41-point lead at quarter time in sunny conditions before rain hit and Tasmania – fielding its youngest team on record – started working its way back into the contest. The visitors kicked six goals to two in the second half and got to within 12 points of the Knights in the last term, but faded to lose by 18 points and bow out of the TAC Cup for 2016 without a win.

The Northern Territory also left the competition for this year on the weekend, but instead claimed an impressive victory by five points over the Oakleigh Chargers at Warrawee Park.

The Territorians looked home holding a 24-point lead over the reigning premiers at three-quarter time, but a four-goal burst remarkably put the Chargers in front before NT steadied with the match-winning major. The loss was Oakleigh’s second of the season.

The Murray Bushrangers and Sandringham Dragons played out 2016’s first draw at Norm Minns Oval, with the Dragons paying for their inaccuracy in front of goal.

Sandringham had five more scoring shots than Murray, and in fact kicked four goals straight in the last quarter to come back from a six-point three-quarter-time deficit, but could only split the points. The tie means the Bushrangers are still undefeated in second spot just ahead of the Dragons.

The only team above them on the ladder is the Dandenong Stingrays, who claimed their fifth win of the season against the Western Jets at an extremely windy Burbank Oval on Sunday.

Both sides failed to score while kicking against the wind in the first half, but Dandenong used the conditions in the first term to establish a 21-point lead that Western never got near. The Jets eventually lost by 54 points and fell to a 1-4 record.

In Round 5’s other matches, the Geelong Falcons moved ahead of the Eastern Ranges into the top four with a 22-point win over last year’s runners-up at Avalon Airport Oval, while the North Ballarat Rebels claimed a 70-point victory over the Bendigo Pioneers at Eureka Stadium on the back of a huge 10-goal third quarter.