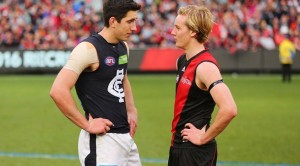 16 former TAC Cup players are in the running to win the 2016 NAB AFL Rising Star award at Tuesday’s presentation ceremony.

Interstate-raised players Callum Mills (Sydney) and Caleb Daniel (Western Bulldogs) are considered the front-runners for the award, but Victorian natives make up the vast majority of the 22 nominees for 2016.

taccup.com.au takes a look at each nominated TAC Cup graduate’s year in the big league.

Last year’s Morrish Medallist from the Murray Bushrangers averaged 19 disposals and almost five tackles per game in 13 matches as a big-bodied inside midfielder.

The dashing but tough ex-Geelong Falcons midfielder averaged almost 21 disposals per game to give suffering Bombers supporters hope for the future.

2015’s no.1 NAB AFL Draft pick from the Dandenong Stingrays averaged 14 disposals and five marks per game as a composed and reliable third tall defender.

The ex-Gippsland Power small forward made an instant impact for the minor premiers, kicking 20 goals in 16 games and providing plenty of pressure inside 50.

In his third season in the AFL, the ex-Dandenong Stingrays forward/midfielder averaged 17 disposals per game and kicked 12 goals in 19 matches.

The ex-North Ballarat Rebels inside midfielder made a prolific 32-disposal debut in Round 8 and went on to average 18 disposals per game in eight matches.

2014’s no.2 AFL Draft pick from the Eastern Ranges overcame a serious knee injury suffered in 2015 to average 17 disposals per game and kick 12 goals in 17 matches as a mid-forward.

The ex-Oakleigh Chargers small defender broke through to debut in his third AFL season and averaged 15 disposals per game in 20 matches.

The ex-Western Jets forward became a man for the big moments in his third year at AFL level, kicking 29 goals in 21 games including the match-winner against the Western Bulldogs in Round 3.

The 203cm ex-Calder Cannons goalkicker established himself in an imposing Suns forward line by kicking 27 goals in 17 games.

A star for the Eastern Ranges in last year’s TAC Cup finals, the hard-running midfielder averaged 17 disposals per game in six matches.

The 2014 Oakleigh Chargers premiership captain kicked 24 goals in 17 games as he continued his development into one of the AFL’s premier young tall forwards.

The ex-Gippsland Power mid-forward took his chances in an injury-ravaged Bulldogs team to average 16 disposals per game in 13 matches.

The ex-North Ballarat Rebels small forward provided a much-needed spark in a dark year for the Tigers, kicking 13 goals in 18 games.