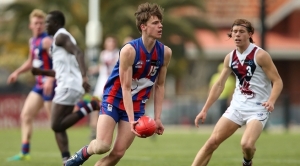 The versatility of Oakleigh Chargers key-position player Jordan Ridley is one of his biggest strengths in the eyes of AFL recruiters.

The 192cm Knox product was turned from a forward into a defender for the 2016 TAC Cup season by Chargers head coach Mick Stinear and flourished in his new role.

Ridley averaged 19 disposals and six marks per game in 16 TAC Cup matches (while still kicking nine goals), and also represented Vic Metro in two games at the NAB AFL U18 Championships – enjoying a break-out 18-disposal, seven-mark performance in a victory over the Allies in Round 4.

taccup.com.au talked to Ridley at the recent NAB AFL Draft Combine, where he recorded the best score in the kicking test.

“I think I’m pretty versatile. I think I use the ball pretty well and I’m really trying to emphasise the work I’m doing off the field as well as on the field – extra gym, extra running and I’m seeing some specialist coaches for running and body work.”

“I’ve had to count backwards by sevens from six-hundred-and-something and spell ‘octopus’ backwards.”

“My goals were just to get drafted, I wanted to become a premiership player with Oakleigh – but that didn’t work out – and make the Vic Metro team, but I didn’t really think I’d end up being here (at the Combine). (I used missing out on Oakleigh’s 2015 premiership as a driving force this year), especially over the pre-season. I was a bit conflicted after the final siren (last year); I was really happy to see all my mates get that success, but I was pretty shattered I wasn’t lucky enough to be a part of it. That sort of kept me going through the pre-season.”

How do you think you handled your shift from being a forward to a defender?

“I wasn’t a fan of it at first; I really wanted to stick in the forward line. I guess towards the end of the season, I really adapted well to it. It’s probably my preferred position now. It was Mick (Stinear’s idea). He said he’d like to show clubs that I’m pretty versatile. I initially thought it was just going to be for one or two of the practice games so I wasn’t too fazed by it, but it’s been pretty much the whole season.”

“(The U18 Champs match against the Allies) would have been my best Vic Metro game. For the Chargers, it’d probably be the Elimination Final win against Calder (28 disposals, 12 marks, five rebound-50s).”

“(Murray’s) Todd Marshall isn’t really what you’d expect from a big key forward; he’s really skilful and pretty mobile. I think he surprised us all with a few of the things he did.”

- Josh Daicos: “He’s a nippy small forward, does some pretty special things and has a bit of X-factor about him. He’s very fast, gets out of tight spaces pretty well and is a good snap at goal which I guess comes with the Daicos name.”
- Taylin Duman: “He plays half back like myself. He’s a very composed ball-user, racks up plenty of the footy and he’s pretty versatile, impacting the game wherever he plays.”
- Pat Kerr: “He had a really good national carnival and ended up as the All Australian full forward. He has a good pair of hands, is really good on the lead and he’s probably one of the best kicks I’ve seen.”
- Sam McLarty: “He’s out with his shoulder at the moment. He’s a massive unit, a really good intercept-marking defender and great pack-mark. That’s probably the highlight of his game – his contested marking and competitiveness.”

“Probably trying to study to be an engineer.”

“I’d have to say (North Ballarat’s) Hugh McCluggage. He’s had an unreal season. Goalkicking midfielders are gold in the AFL these days.”