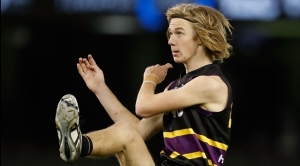 Todd Marshall is in the frame to be the first key forward picked at the 2016 NAB AFL Draft after deciding to focus his sporting energy on playing for the Murray Bushrangers this year.

The 198cm Deniliquin, NSW product played cricket for most of his teenage life, but prioritised football after returning from a school cricketing tour of the United Kingdom last year.

Marshall drew plenty of attention as he athletically burst onto the TAC Cup scene early in the season, going on to kick 22 goals in 11 games for the Bushrangers and seven majors in four matches for the Allies in Division 1 of the NAB AFL U18 Championships.

“Probably my strongest traits are my acceleration and pace... and contested marking – it’d be nice if there was a test (at the Combine) for that.”

“I got asked if I went to the Deni (Deniliquin) Ute Muster. I had the (NAB AFL U18) All Stars game on so I didn’t get to go there.”

“Tom Lynch from Gold Coast is one I like watching and obviously (Sydney’s) Lance Franklin, but I’m probably more suitable to Tom Lynch with his agility around the ground and his ability to take some good marks.”

How did you come to the decision to choose playing footy over cricket?

“I was playing rep cricket since age 13 right up to the middle of last year when I went overseas with the NSW Combined High Schools team. I went to the UK and played a total of 10 matches which was good fun, but after that I just decided to play some footy.
If this year didn’t pan out the way it has, it probably wouldn’t have been the right decision, but I feel like I’ve made the correct one.”

“My expectations were pretty little at the start of the year. My year’s been a little bit up-and-down which is disappointing; hopefully I’ve done enough to get my name called out (at the draft).”

How have you handled the scrutiny that has come with being a potential top draft pick this year?

“Early on it was a little new to me. I’d only played about five games and I was all over afl.com.au and Facebook, but you learn to handle it. You’ve just got to not read into it too much because at the end of the day, you’ve still got to get your name read out (at the draft).”

“Probably the (Round 15) game against Sandringham at Craigieburn. It was very windy that day and at three-quarter time we were down by 19 points. I kicked two last-quarter goals and had a few tackles and possessions (17 disposals, seven marks, seven tackles and three goals for the match), and I sort of think I helped us get the win.”

“Griffin Logue from WA is a very good player; he’s very attacking and he’s very good at defending as well. Jack Maibaum from Eastern – I played against him for the Allies (at the U18 Championships) and he definitely had me on that day. I’m sure both of them will have very good AFL careers.”

Talk about why you think some of your teammates at the Combine are so highly rated.

- Will Brodie: “What you see is what you get with him. He’s a contested bull and he does all the inside work and makes other players look good. He definitely doesn’t go unnoticed and when he’s on, he’s on.”
- Esava Ratugolea: “He’s an excitement machine and very fun to play alongside. He can do things that make you wonder: ‘How does he do it?’ His leap is unreal to watch.”

“I want to get into uni... and probably study exercise science or a PE field.”

“It’s got to be (North Ballarat’s) Hugh McCluggage. He’s been the most consistent across the year and he also does things that make you wonder how he does them.”