Funding for Ranges’ home base 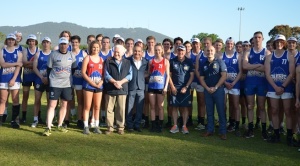 The home base of the TAC Cup’s Eastern Ranges, Kilsyth Recreation Reserve, will be upgraded with the assistance of $900,000 in funding from the Victorian State Government.

State Member for Monbulk James Merlino made the announcement regarding the multi-million-dollar Kilsyth Centre for Sport Excellence earlier this month.

To be delivered in partnership with the Yarra Ranges Shire, AFL Victoria and the Federal Government, the facility will help provide the best possible environment for developing elite footballers in the state’s eastern region.

With the addition of an under-18 Girls Academy this year, the Eastern Ranges program is now providing pathway opportunities for both male and female footballers in the region to achieve their football dreams.

The redevelopment will include the addition of home-and-away unisex change rooms, unisex umpire rooms, meeting and lecture rooms, a gymnasium and office space to accommodate both the Eastern Ranges and AFL Yarra Ranges administration.

It will not only provide training and playing facilities for players but will be an important venue for the delivery of a range of AFL Victoria/AFL Yarra Ranges programs including coach accreditation and volunteer development.

Eastern Ranges Talent Manager Len Villani said the Centre for Sport Excellence was what the region deserves and has needed for a long time.

“The Eastern Ranges are delighted with the money announced to make this facility a reality and give boys and girls a chance to realise their talent and maximise their potential as footballers and as people,” Villani said.

“It is our plan to relocate our operational Headquarters to the Centre for Sport Excellence once work is complete,” McCormick said. “This will not only give our already successful Junior Interleague Academy program the chance to experience elite pathways first-hand, but it will also help our junior girls’ teams (which have doubled in number in the last 12 months) a greater chance and higher motivation to progress through talent pathways.”

“The commitments of both the State and Federal Governments to this project provides enormous impetus for this project and we look forward to continuing to work with Yarra Ranges Shire to progress the designs and see the project come to life,” Bell said.