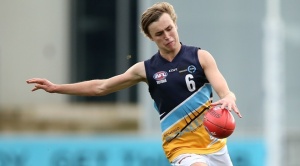 Jarrod Brander (four games, 10 goals, ave. 13 disposals and six marks in 2016): “Jarrod’s clearly one of our leading draft candidates. He’s a key forward/key defender and he’s attending Geelong Grammar on a scholarship for cricket and football. He’s part of the AFL Academy.”

Lochie O’Brien (pictured - five games, ave. 24 disposals and seven marks in 2016): “Lochie’s a left-foot half back/outside midfielder who’s counted as a fairly strong draft prospect. He played for Vic Country in the U18 Championships last year as a bottom-ager. He’s in the AFL Academy and on a scholarship to Geelong Grammar.”

Paddy Dow (eight games, ave. 22 disposals in 2016): “Paddy’s a hard-working inside midfielder and another Geelong Grammar scholarship holder. He won the school team’s best-and-fairest in 2015 and 2016 and became the only Year 10 student to have ever won the award in the history of the school in 2015. He was recently included into the AFL Academy.”

Brent Daniels (three games, four goals, ave. 20 disposals and five tackles in 2016): “Brent’s a smaller defender who can play through the middle and up forward, so he’s probably more of a hybrid sort of player. He was a Vic Country U16 player in 2015 and had a meniscus injury last year so he hardly played any footy. He’s fit and raring to go this year and we think he’s a good draft possibility.”

Kane Farrell (16 games, ave. 17 disposals and four marks in 2016): “Kane’s a half back/inside midfielder with an excellent kick and we reckon he’s a pretty strong draft prospect. He attends Bendigo Senior Secondary College and is involved in our specialised football program there. He’s in the AFL Academy as well.”

Angus Schumacher (15 games, ave. 14 disposals in 2016): “Angus is a medium-sized half back/half forward who will probably play through the midfield as well. He’s a pretty good sort of player and is probably one of those ones AFL clubs are speculating on a little bit.”

Cooper Jones (nine games, six goals, ave. 16 disposals and five marks in 2016): “Cooper had a bad run of injuries last year. He represented Vic Country in the U18 Championships. He’s a medium-sized half back/half forward and we think he has draft prospects, but he just needs to get his body right. He’ll be a later starter this year – he’ll probably be ready to go in about June but we’re not too concerned about that, as we had Fergus Greene drafted last year and he only played the last three games for us.”

Riley Burns (three games, ave. nine hitouts in 2016): Riley’s 203cm – probably the tallest kid we’ve had for a long while. We got him here as part of trying to develop some of our tall boys and we’re really keen to see how he develops in our environment and under our training conditions.”

Jacob Atley: Bottom-age brother of Shaun (132 AFL games for North Melbourne) and Joseph (drafted to Port Adelaide in 2016). “Jacob will be different to both of those boys – he’s taller than them at about 191cm at the moment. He’s currently a key defender.”

“We’re just hoping to be a little more competitive this year. In 2015 we only had 10 bottom-agers who actually played, so only 10 of our top-agers last year had match experience. Last year I think we had 31 bottom-agers play so that should hold us in good stead in regards to kids understanding what the program’s about this year. We think we’ll be fairly competitive if we can get our best team on the field together as there’s some good top-end talent, but with AFL Academy players, GWS Academy players, Allies players and Geelong Grammar players, we’re not going to see a lot of five or six of them.”

“Our new head coach Rick Coburn has been going really well. He’s super organised and is really rolling his sleeves up and working really hard. We’ve also recruited some really experienced assistant coaches and members of our support coaching team, including Brett Warburton who coached the Shepparton Swans to the 2014 premiership in the Goulburn Valley league. Former Bendigo Pioneer and Hawthorn premiership player Rick Ladson’s coming back to do some work with the club. He’ll be one of our assistant coaches and will do a lot of one-on-one work with our kids. We’ve also appointed Danny O’Bree as a development coach, who’s coached successfully in the Sunraysia league and Mildura and through to Central Murray down to South Bendigo in the Bendigo league. He’s going to look after all our individual development plans for kids – that’s a really critical appointment and we think he’s doing a great job.”