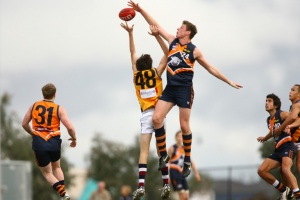 The Calder Cannons scored nine goals to one in the second half of their clash with an undermanned Sandringham Dragons to win by 63 points on Saturday, as Adem Saricaoglu reports.

Eleven of Calder’s 17 goals were shared between Jack Solomon (5), Josh Burgess (3) and Daniel Markworth (3) in what was a brilliant display by the Cannons in good footy conditions at Highgate Reserve in Craigieburn.

The Dragons got the jump on the Cannons early, building a 13-point lead before conceding the last goal in what was a high-scoring first quarter.

Sandringham continued their dominance in the second term but failed to put it on the scoreboard.

Damien Bugeja scored the breakthrough goal that brought the Cannons within three points, before a brilliant play from Jason Williams and Todd Coran against three opponents on the wing set up a goal from Solomon, giving the Cannons a lead they would never give up for the rest of the day.

Calder scored the last three goals of the half to lead by eight points at half time.

Calder assistant coach Andrew Jago, who coached the side on Saturday, credited the comeback with better kicking in the back half.

“We made a real focus to change our kick-to-handball ratio,” Jago said.

“We were about one-to-one, and we made a real conscious effort to change that to two kicks for every handball to beat their press.

“It was something we addressed at half time, that we were over-possessing the football in the back half.”

Calder picked up where they left off after the break, with Solomon putting on a clinic in the right forward pocket throughout the quarter.

Going into the game with the flu, he slotted through the first goal of the second half from a tough angle, and then stretched for a great mark in the following play, but his banana hit the post.

Calder had all the answers in the middle and unlike the Dragons in the first half, managed to provide the finishing touches.

A downfield free kick gave Solomon his fourth shot and second goal for the term.

Despite completely controlling the third quarter, the Cannons only stretched the margin to 20 points by three-quarter time.

Sandringham coach Dale Tapping urged his chargers for some heart at the final change, but their body language looked defeated.

Centre clearances continued to go to the Cannons and when Sandringham could get their hands on the footy, they couldn’t get it past half back.

A goal to Nick Fletcher killed off any chances of an unlikely Sandringham comeback five minutes into the last quarter.

Kicking errors plagued the Dragons throughout the quarter as Calder boosted their percentage.

Sandringham added nothing to the scoreboard after three-quarter time as Calder piled on six goals that polished off their fifth win of the year.

“We were hoping to bounce back after going down in Tasmania a couple of weeks ago, but it just didn’t happen for us today,” Joice said.

“A lot of our best players were bottom-agers, which probably says a lot about our performance.”

Meanwhile Jago said it was an important win for the Cannons.

“(In) the second half we were much better, we protected our ball carrier and our delivery was much longer,” he said.

“It was a very good effort because Sandringham are an exceptionally good side.”

Round eight sees both sides return to Highgate, with the Cannons taking on the Western Jets and Sandringham playing the Geelong Falcons on Saturday.