Jets Too Strong For NSW/ACT 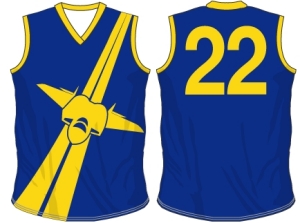 The Western Jets came out on top in their clash against NSW/ACT scoring a strong 38 point win after what was a close contest early, as Anthony Cheyne reports.

NSW led the game at quarter time by 2 points as both sides looked to find form in the wet conditions. It was a similar story at half time with the Rams holding onto four point lead. Both sides struggled to find control in the wet as the ball rebounded up and down the ground. The Rams had more scoring opportunities but could not convert them to score board pressure and it proved a problem as the Jets got on top in the second half.

After half time the Jets running game got them on top. Jack Charleston and Harley Inglis got Western up and running and as the inside 50 count mounted, the Rams defence finally cracked allowing Western to get away to a 23 point lead at three quarter time.

Western kept the pressure up in the last quarter keeping the Rams to zero goals while adding three more to their own score. Will Hoskin-Elliott kicked three telling goals in the second half for the Jets and was well supported by defenders Courtney Hylton and Nicholas Holdsworth.

NSW/ACT really struggled to handle the wet and mud in the second half as they had a lot of the ball but could not convert it into a score. Jack Lynch never backed down in defence provided some good defensive spoils and run out of half back.

Another big man Oliver Tweedale did well in the conditions kicking 2 goals and getting a few touches around the ground, Jarrod Witts was strong in the ruck and Harry Cunningham caused the Jets a few problems with his pace around the ground.

The Jets will this week face the inform Calder Cannons, whilst the NSW/ACT Rams kick of their National Championships campaign against Vic Metro.