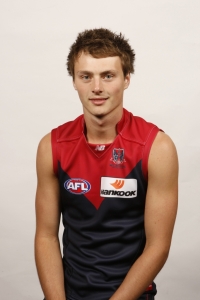 Jordan Gysberts from the Melbourne Football Club is the Round 11 NAB AFL Rising Star nominee.

The 19-year-old mid-fielder earned his nomination after an outstanding performance on Friday night against Essendon at the MCG. He complemented his 30 possessions with four tackles and eight marks.

The nomination is Jordan’s second, after he was nominated after Round 11 of the 2010 season, before his season was cut short with a back injury.

Under the criteria for the NAB AFL Rising Star, a player may win nominations across two seasons, provided he has not played more than 10 games and is under 21 years of age.

Jordan made his AFL debut in Round Ten last year and was nominated as a Rising Star after his second league game. After returning to the VFL, he suffereda back injury and did not play in the last two months of the season.

This year, Jordan played his first senior match in Round Three and his sure-ball handling and neat disposal has kept him in the senior side since and won him another rising star nomination.

“Jordie’s contribution against Essendon was terrific, he’s just a natural footballer who is clearly at home at the elite level of AFL,” Bailey said.

Jordan represented Vic Metro in four matches in the 2009 NAB AFL Under 18 Championships before being drafted to Melbourne as selection 11 overall. During his stint with Vic Metro, Jordan averaged 16 possessions at 77 per cent efficiency and proved dangerous around goal, kicking five for the carnival.

In 2009, Jordan also played six matches with the Eastern Ranges and was part of the team’s leadership group. He averaged 23 disposals (nine contested) per match and was most impressive in the club’s two finals matches where he gathered a total of 50 possessions, 14 marks and booted three goals. Jordan played junior football for Chirnside Park and Norwood Football Clubs.