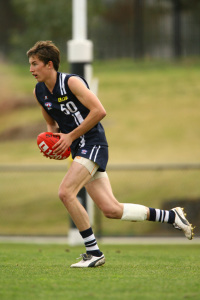 The Geelong Falcons handed the Sandringham Dragons their third straight loss at Highgate Reserve in Craigieburn on Saturday, as Adem Saricaoglu reports.

Their 40-point win brought the Falcons into the top four, one spot below the Dragons on the ladder at the end of round eight.

Sandringham’s forward press took effect from the first bounce and restricted much of Geelong’s run throughout the first quarter.

The Dragons dominated possession in their forward half, but on the scoreboard could only kick one of their six scoring shots accurately, and led by only three points at quarter time.

Their wayward kicking continued into the second quarter, with Jackson Coleman getting nothing from his shot, but team mate Anthony Anastasio was able to convert minutes later to extend the lead to 10.

The Falcons lifted their intensity and slowly grabbed control of the game, which was rewarded with back-to-back goals to Jai Sheahan that put them in front.

A clanger handball from Dragon Dylan Gabron-Uhe while being tackled gifted Jackson Merrett his first goal for the game, extending Geelong’s lead to nine points, which was cut down to three by half time.

“We just weren’t backing ourselves to run and carry through their press enough early on,” Greaves said.

“We were just too stagnant; we needed more movement through it.”

Sandringham coach Dale Tapping said wasted opportunities in front of goal hurt his side going into the main break.

“If you kick three or four of those it puts the opposition under a little more pressure because they kick one goal and their back in the game again,” he said.

“I thought we pretty much, for the first 20 minutes, dominated general play.”

The game’s tempo lifted from what was a dogged first half in the third quarter, but most of the scoring went to the Falcons’ end of the ground.

Back-to-back goals for Geelong midfielder Jordan Keras set the tone for the rest of day.

Geelong, less affected by the NAB AFL Under-18 Championships than the Dragons, looked and played more efficiently.

Anastasio’s second goal pegged the margin back to 10 points 11 minutes in, but Matthew Higgins replied for the Falcons a minute later.

Sandringham fought hard to stay in the game and attacked the footy well, but another goal from Sheahan at the 16-minute mark seemed to deflate their spirits.

Four goals to one in the third quarter had the Falcons up by 20 at the last change and the game wrapped up.

Geelong added another four goals to Sandringham’s one in the final quarter.

Tapping said after the game that he was pleased with his side’s effort to compete with Geelong’s bigger bodies.

“If you look at it from a win perspective, yes it was disappointing, but I was quiet happy with the way the boys competed,” he said.

“Given where the squad is at currently I thought we did pretty well.”

“It probably took a little bit to get into the game,” Greaves said.

“Once we did, I thought our second half was fantastic.”