Crozier Takes Mark of the Year? 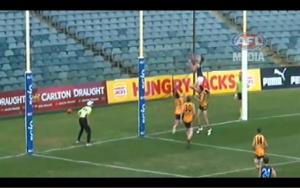 THE COUNTRY'S best two draft prospects were on display at Patersons Stadium on Sunday, but it was Vic Metro forward Hayden Crozier who stole the show with one of the best marks taken this year - at any level.

Crozier doesn't yet have the profile of Metro teammate Jon Patton or WA midfielder Stephen Coniglio, who were both excellent on Sunday, but he is generating some excitement at this year's NAB AFL Under-18 Championships.

The 17-year-old firmed as a potential top-10 NAB AFL Draft pick following his four-goal performance, which was capped by an incredible pack mark late in the second quarter.

Click HERE for the full story and vision of the mark