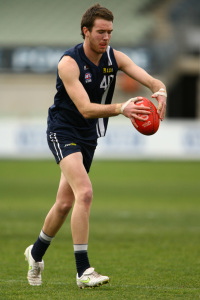 The 2011 TAC Cup season for Loy Yang B Gippsland Power took a disappointing downturn on the weekend when they lost narrowly to Geelong Falcons at Visy Park. Both sides had gone into the game without their state team representatives so it was a level playing field and optimism was high for the Power based on their wonderful season so far.

Gippsland won the toss however chose to kick into the wind with Geelong quickly scoring the first goal of the game. Tim Membrey kicked the Powers first goal at the eight minute mark of the first quarter with both teams applying consistent pressure in contested issues. Geelong had the better of the first quarter going inside 50 15 times to Powers 5. Gippsland Powers defence were doing a great job to stem the tide. Quarter time scores Geelong 3.3.21 to Gippsland 1.1.7.

It was the Power who scored the first two goals of the second term and the Power were looking good as they made the Falcons look ordinary with great tackling and chasing pressure and then used the football with great precision by hand and foot. The Power dominated this quarter and where able to keep the Falcons scoreless for the quarter. Half time scores Gippsland 6.4.40 to Geelong 3.3.21.

After the long break the Falcons come out with renewed vigour and Power’s unwillingness to be accountable through the midfield and lack of tackling and chasing pressure in the forward line was exploited further by the Falcons. Geelong kicked four goals to one during the quarter while the Power wasted all of their forward fifty entries with poor finishing and an inability to kick to their forwards advantage. It was disappointing to watch as they wasted many chances late in the quarter and should have been more than 4 points in front at the three quarter time break. Three quarter time scores Geelong Falcons 7.6.46 to Gippsland Power 7.9.51.

At a time when Power had the wind, all out attack was required. The Power were over-using the ball and kicking too short and making the Falcons job much easier to defend against them. The Falcons scored the vital first goal against the wind and seemed to have a real self belief once they hit the front. The Power had their chances but kicked only minor scores and finally went down by 5 points.

Gippsland Power’s next challenge will be Sunday at the Morwell Football Ground starting at 12-00 noon when they take on the Eastern Ranges. Geelong will head to Warrawee Park to take on Oakleigh Chargers.