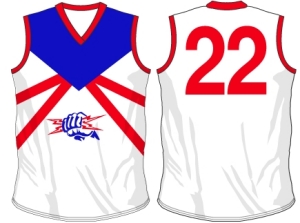 Eight goal and behind posts shook from the first bounce to the final siren as the Gippsland Power beat the Murray Bushrangers by 27 points at a very windy Highgate Reserve on Saturday, as Adem Saricaoglu reports.

The win put the Power one game clear on top of the TAC Cup ladder while the Bushrangers are languishing in outright second-last.

The win was set up by Tim Membrey, who nailed six goals and made a mockery of the strong breeze at the non-scoring northern end of the ground.

A southerly breeze proved to be the biggest factor in the game, with no score registered at the northern end in the entire first half.

It was the Power who kicked with the wind in the first quarter as they piled on 5.4 by quarter time.

It took 12 minutes into the second quarter for the Bushrangers to score their first major of the game, when Sam Martyn set up Lachlan Smith.

However it was the Power who dominated possession and constantly had more numbers around the neutral ball, albeit without penetrating the scoreboard.

Murray wasted scoring opportunities and put four behinds on the board before Lonnie Hampton kicked their second goal.

Murray added 3.4 and conceded nothing on the scoreboard in the second term but trailed by 12 points at the main break.

The Bushrangers had only conceded one goal in the third term when Sean Johns had a rare shot on goal at the northern end.

That opportunity went begging as the margin remained 18 points for most of the middle stages of the quarter.

Martyn struggled to make the distance for a 30-metre set shot but a minute later they managed a goal from a large pack at the top of the goal square.

However the Power eventually kicked into gear and it didn’t take long to add to their lead, kicking three goals by the final change to lead by 34 points.

Needing six unanswered goals with the wind to steal the four points, the Bushrangers had it all in front them at the start of the last quarter.

However by the three-minute mark, their task was rendered impossible.

Membrey’s two shots at goal netted one major - his fourth for the game - into the near gale-force wind early in the last quarter to stretch the margin to 42 points.

Gippsland began dominating in the centre-clearances count and consistently fed the ball deep for Membrey to go to work.

In the right forward pocket he eased past his opponent and ran into the open goal for his fifth before finishing the game with his sixth minutes before the final siren.

Murray managed four goals throughout the final term to add respect to the scoreboard, but was outclassed by the Power in very cold conditions in Craigieburn.

After the development round, Gippsland take on Oakleigh Chargers, and Murray Bushrangers host North Ballarat Rebels.