Draft Prospect Shine in Final Round 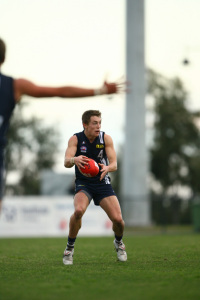 SEVERAL players announced themselves as genuine draft prospects in the last round of TAC Cup football before the finals series.

Sandringham took on the Western Jets in the first game of Saturday's triple-header at Highgate Recreation Reserve, with onballer Alex Woodward starring in the Dragons' 52-point win.

Liam Sumner enhanced his credentials as a potential top-10 pick with another excellent display, his breakaway speed a feature.

Exciting prospect Elliott Kavanagh suffered a corked thigh early in the game and did not return after half-time.

Matthew Buntine's class was apparent as Dandenong dispatched Bendigo by 72 points, while tall forward Todd Elton bounced back into form with his three goals and strength overhead a key factor in the win.

Midfielder Sam Kerridge was busy for the Pioneers and looks a likely type.

The Calder Cannons were able to resist a late challenge by Gippsland Power with beanpole forward Liam McBean outstanding for the Cannons with four goals. The 199cm forward is too young for this draft, but will be one to watch next year as he adds some weight to his frame.

Cannons' skipper Tom Sheridan was again impressive, but Daniel Markworth put in one of the most eye-catching performances of the day, with the 189cm utility lively both around the ball and up forward.

Markworth is late to football, but a good finals series will confirm his status as this year's draft bolter.

Tough nut Clay Smith and classy defender Sam Docherty were both polished performers for the Power with Docherty's poise and decision-making under pressure a feature. Smith also showed there is more to his game than hard running and contested footy with a brilliant high mark late in the game.

Even with potential top-5 pick Dom Tyson unavailable, Oakleigh was far too good for the Geelong Falcons in the first game of Sunday's triple-header at Visy Park.

The Chargers ran over the Falcons to the tune of 130 points with Jack Viney putting in yet another performance that will have Melbourne fans counting the days until the father-son pick debuts for the Demons.

As far as this year's draft goes, versatile tall Adam Tomlinson looks an excellent prospect as does prolific ball winner Toby Greene, while over-aged forward Damian Mascitti did his chances no harm with a five-goal return.

Taylor Adams and Devon Smith are the most highly-rated prospects at the Falcons, and while they showed glimpses of their class, neither was able to impose their will on the contest.

Key defender Andrew Boseley made a few eye-catching runs from defence and has improved his draft standing in recent weeks.

Potential No.1 draft pick Jonathon Patton was in action for Eastern Ranges and was pivotal in their win against the Murray Bushrangers.

Patton still doesn't look quite at ease with his set shot kicking, but still booted five goals to drive his team to a 16-point win.

Jack Crisp ran all day for the Bushrangers, creating opportunities for himself through sheer work rate, and will be hoping that's enough to get him drafted with his team finishing well out of finals contention.

Oakleigh's win made it impossible for the Northern Knights to make the finals, but the Knights still gave the North Ballarat Rebels a fright with the Rebels needing to come from behind to score a thrilling two-point win.

Northern ruckman Billy Longer dominated the hitouts to cement his standing as a potential top-10 pick with Sam Dobson prominent for the Rebels with three goals.

Exciting North Ballarat youngster Brad Crouch, who is too young for this draft but could find himself at an AFL club during trade week via the GWS mini-draft, showed he is well advanced in his recovery from a broken leg suffered during the NAB AFL Under-18 Championships by running sprints during breaks in the game.

Article thanks to afl.com.au