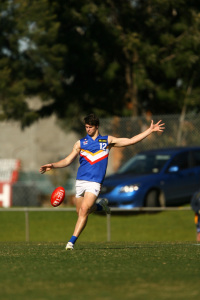 Nothing but pride and a final chance to impress AFL recruiters was on the line at Visy Park on Sunday as the Eastern Ranges beat the Murray Bushrangers by 16 points, as Adem Saricaoglu reports.

In sunny, yet tricky kicking conditions, the Ranges took better advantage of kicking to the Legends Stand end of the ground, where 15 of the game’s 17 goals were scored.

Ten behinds were shared evenly between the two sides in the first quarter as goal-kicking was rendered difficult with a light swirling breeze.

However it was the Bushrangers that produced more goals by the first break, going into it up by two goals.

In the second quarter, with the Ranges now kicking to the Legends Stand end, it didn’t take long for their gun forward Jonathon Patton to assert his dominance on the game.

Two minutes in he kicked his first goal of the game and kick-started his A game.

Both on the lead and in contested situations he was taking marks, but his kicking let him down.

Eastern dominated possession throughout the second quarter and knew they couldn’t fail if they sent the ball in Patton’s direction.

In a brilliant display that exemplified why Greater Western Sydney should use their number one draft pick on him, Patton netted three goals from seven attempts as Eastern overcame a two goal deficit and turned it into a 17 point lead.

Ranges’ small midfielder Damien Volta scored the only other goal of the quarter as Murray went goalless.

With seconds left in the first half, Murray finally penetrated their forward line and had Luke Visser running in for an open goal.

However Eastern defender Michael Bussey managed to chase down Visser and affect his shot at goal, resulting in a point that kept the margin beyond two goals at halftime.

Both Lonnie Hampton and Sam Martyn missed early opportunities to reduce the margin after the break, but a back pocket turnover from Callum Morison soon had Cadeyn Williams kicking Murray’s fourth goal of the game.

The margin sat on eight points for a while as both sides increased their pressure on the ball carrier through the middle of the ground.

Lachlan Howe eventually broke the deadlock for the Bushrangers at the 10-minute-mark, reducing the margin to two.

A 50-metre penalty to Pattan gifted the Ranges a goal against the flow of play, but Murray didn’t let it stem their flow.

Constant 50 entries eventually resulted in Williams’ second goal of the term, and within five minutes later, Murray hit the front.

Pattan sent a scare through Eastern’s and perhaps GWS’s camp when he went down with what appeared to be an injury to his right ankle minutes before three-quarter time.

However he recovered and played out the entire final quarter.

By the final change Murray could only establish a five-point lead, and by the two-minute-mark of the final term, Alex Greenwood restored Eastern the lead.

The Bushrangers had three opportunities to kick goals against the flow, but missed all of them.

At the 15-minute-mark Murray defender Tom Clurey, who battled hard on Patton all day, wrestled the forward to the ground after marking the footy, resulting in another 50-metre penalty and goal that turned momentum Eastern’s way.