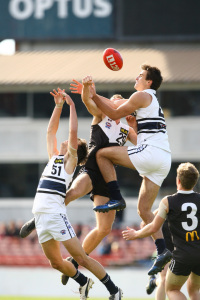 It wasn’t pretty, but the North Ballarat Rebels won their final home and away game of the season, edging out the Northern Knights by two points in their TAC Cup clash at VISY Park Sunday.

The win cemented North Ballarat’s position in the finals, with their elimination final matchup this Sunday coming against the Oakleigh Chargers.

North Ballarat held all the play in the opening term, with first-game ruck Tom Downie and on-baller Will Pomorin giving the Rebels forwards many opportunities to put an early score on the board.

These opportunities became wasted however, as the North Ballarat forwards struggled to find accuracy in front of the big sticks.

Rebels coach David Loader was frustrated with his side’s lack of composure in the first half when shooting for goal, which effectively kept the Knights in the match.

“If we capitalise on those early chances then it puts us up by five goals at quarter time, and where does that leave the match then,” said Loader.

“I just think we panicked a bit in front of goal at times, which can happen when a few of the boys have been down on form over the past month.”

Despite having five more scoring shots than the Knights at quarter time, North Ballarat only held a five-point margin at the first break.

The second term played out much the same as the first with both teams going goal for goal for the entire quarter, but the Rebels again squandered opportunities in front of goal to go further ahead.

If not for the superb defensive efforts of North Ballarat backmen Tanner Smith and David Morris, the Rebels may well have found themselves multiple goals down at the half, instead of holding a seven-point lead.

The Knights came out after half-time as the more attacking side, with their decision making and disposal becoming noticeably more efficient as the game wore on.

Despite the Knights moving in front of their opponents on the scoreboard North Ballarat continued to fight, with inside midfielders Pomorin and Coleman Schache consistently winning the hard ball despite intense pressure from the opposition.

The Knights had battled their way to an eight-point lead at three-quarter time and looked like staging an upset victory, but after a close knit opening ten minutes of the final term North Ballarat began to find space through the middle which resulted in goals later in the term.

Once North Ballarat regained the lead they were then able to control the match, holding off the best efforts of the Knights to record their tenth win of the season and officially finish sixth on the TAC Cup ladder.

“It’s been a successful year, we probably haven’t played really great footy for the last month but today there were certainly patches of play that showed we are still capable of playing some decent footy,” Loader said.

“We’re now one of eight teams in the finals trying to put our best foot forward next week to see what we are capable of doing”.

By finishing sixth the Rebels have booked themselves an elimination final berth against the Oakleigh Chargers at VISY Park in Carlton on Sunday.

A great display of finals football is expected with the Rebels defeating the Chargers by just four points earlier in the year in their only encounter of the season.