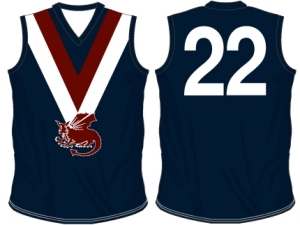 GIPPSLAND Power, valiantly attempting to right a season that is in danger of running off the tracks, began well in its Qualifying Final against Sandringham Dragons.

Although kicking against the wind, Gippsland more than matched the Sandringham Dragons to find themselves only three-points down at quarter time.

But, the Power’s season took another turn for the worst when Vic Country representative Clay Smith was injured and was forced from the field.

It had an unsettling effect that went well beyond replacing one of Gippsland’s spark plugs. The Dragons seized the moment to kick 7.1 while holding the Power to the solitary goal for the quarter.

With Sandringham holding a commanding lead, Gippsland was unable to make any inroads in the pivotal third quarter and, in fact, saw its half time deficit balloon from 40-points to 58-points at three-quarter time.

While the Power stuck to its task and outscored Sandringham in the final quarter, all it had the effect of doing was reducing the margin to a more respectable level, 19.12 (126) to 13.4 (82).

Sandringham was dominant in winning the clearances with captain Alex Woodward, Brede Seccull and Kenny Ony setting the standard for their teammates.

It was hard to reconcile this was the same Gippsland team that had gone down by four points against Sandringham in round 16, but shell-shocked Power are in a rut at the wrong time of the season.

Conversely, Sandringham march into a Preliminary Final having eight wins, one loss and a draw from its past 10 games, with its sole loss against Dandenong Stingrays, which find themselves in the other Preliminary Final.