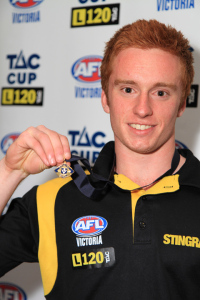 Dandenong Stingrays Alex Benbow has won the 2011 TAC Cup Morrish Medal. In an exciting finish to the Under 18 competitions best and fairest awards night held at Etihad Stadium on Sunday, Benbow hit the front in round 13 and was able to hold on in the final four rounds to finish on 22 votes, one vote ahead of Sandringham’s Alex Woodward and Gippsland Powers Danny Butcher. Woodward led the early rounds of the count, and three of the maximum four votes in the final round saw him finish as joint runner up.

The win for Benbow caps off a great home and away season for the Stingray, who was the leading possession getter this year for Dandenong, and also led the club in contested possessions as well. He played two games with Vic Country in the NAB AFL Under 18 National Championships, and his side Dandenong have made it through to the TAC Cup Preliminary final to be played next Saturday at Visy Park. Apart from his Morrish Medal honour, Benbow was one of two Stingrays selected in the TAC Cup Team of the Year, named at half forward along with back pocket Matthew Buntine. Their coach Graeme Yeats was named Coach of the Year after a fantastic finish to the season saw Dandenong rise up the ladder to fourth spot.

In other results announced on the night, Northern Knights Nick Maric was the leading goal kicker for season 2011 in the TAC Cup, and Shaun Marusic was the TAC Cup Coaches Award winner (28 votes), with Gippsland Powers Danny Butcher, like the Morrish, finishing one vote behind. The TAC Cup Team of the Year was also announced, which is on the TAC Cup home page.