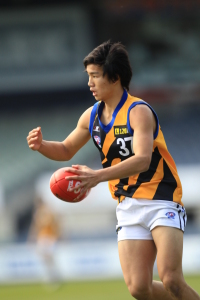 The Sandringham Dragons are through to their second TAC Cup grand final after storming home to beat the Calder Cannons in their Preliminary Final, as Adem Saricaoglu reports.

The Dragons were buoyed by the efforts of their small forward Anthony Anastasio, who kicked two crucial goals late in the game, the second of which put them in front at the 20-minute-mark.

“He’s busy - he’s been a real revelation for us this year,” Tapping said.

“He’s just been fantastic for us all year and for him to perform like that today was great.”

Inaccurate goal-kicking plagued both sides all day, but the windy conditions got progressively worse throughout the game.

Kicking towards the Legends Stand, Calder could only manage 2.5 in the first quarter and only had a three-point lead at the first break.

They brought their inaccuracy into the second term, where they again could only manage another 2.5, and got outscored by the Dragons, who kicked 3.2.

Calder’s Jack Solomon had a chance to give the Cannons the lead close to half time, but missed to level the scores at the main break.

The Cannons came out firing after the half time, with forward Nick Fletcher causing chaos for the Dragons.

Fletcher netted two goals from four shots in the quarter as his team mates continually hit him up in their forward 50.

Both sides used run-and-carry to counter the conditions, and the game lifted in intensity.

Shots were fired at each end but no one could kick a goal.

Anastasio finally broke the deadlock for the Dragons 11 minutes in, but a free kick in Calder’s hot spot for a throw saw Darcy Bailey extend their lead to eight points.

Minutes before three-quarter time Sandringham’s Jackson Coleman was given a chance to reduce the margin to nine, but missed horribly as the wind took his shot far to the left.

The Cannons’ lead was 16 points by the final change, but Sandringham had the scoring end to kick to for the last quarter.

Two brilliant efforts by Anastasio to win holding-the-ball free kicks resulted in wasted shots on goal early in the last quarter as the Dragons began peppering their goals.

Half way through the quarter, with the margin sitting on 15 points, Jack Sheahan missed what would have been a sealing goal for the Cannons, before hitting the post minutes later.

The first goal of the quarter finally went to Anastasio at the 17-minute mark to reduce the margin to nine.

It seemed to spur the Dragons, who kept pressing forward as the clock ticked down.

Another quick goal to Kenny Ong put the Dragons within a kick, and from the following forward entry Anastasio snapped from the goal-square to put Sandringham in front.

From there they never looked back.

Tapping credited his playing group with believing in themselves to come back from what seemed to be a match-winning lead for the Cannons.

“We were still right in the game and obviously there was an advantage going to our end, and we just kept working through it and we just executed a bit better than we did in the first three quarters,” he said.

“At three-quarter time the message was really simply, to just keep working, keep believing and to get there.

“You’ve got a hundred minutes to get it right and we got it right at the right time.

“We had guys that were pretty heroic in at the contest, and guys putting themselves under real physical risk.”

Players from both sides fell to the ground at the final siren after what was a very taxing, fast-paced game.

“They’re a bit fatigued being 18-year-old kids but they’ll be right to go next week,” Tapping said.

“They would have been a lot soarer if they had lost the game.”

The Dragons face the Oakleigh Chargers in the grand final at Etihad Stadium on September 25.