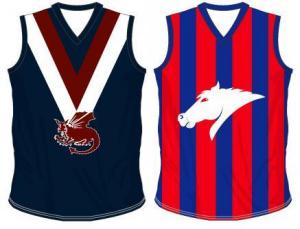 Let's have a look at who the media think will win this weekend's TAC Cup Grand Final.

Emma Quayle (The Age): Oakleigh by 20 points. The Chargers' midfield, led by Dom Tyson, Jack Viney and Toby Greene, should prove be a bit too strong.
Best on ground: Toby Greene.

Ben Guthrie (Inside Football): Oakleigh by 14 points. Oakleigh's top-end talent should ensure them a narrow victory against a fighting Sandringham side. Best on Ground: Dom Tyson (Oakleigh)

Sam Landsberger (Herald Sun): Sandringham by 12 points. The Dragons have an even spread of talent across the park and with pace and skill could be better suited to Etihad Stadium. TAC Cup medal: Liam Sumner. The explosive star with impeccable balance loves the big stage and will punch holes through the midfield.

Rick Morris (TAC Cup Radio): My tip for the Grand Final is Oakleigh Chargers by 21 pts. Chargers have stormed into calculations with 3 wins in the last three games gaining 7th position on the ladder. They have done a remarkable job to make the grand final mainly due to a their aggression at the ball from tough players like ‘’The Woof’’ Mitchell Wooffindin and ‘’the Biscuit’’ Matthew Arnot. Other smalls Toby Greene and Seb Gotch have shown their real class during the finals. Down back Curran and Tomlinson have done a great job also. For the Dragons, Benny Darrou is giving them great drive out of defence. The Darren Bewick lookalike Anthony Anastasio has been dangerous up forward. Ned Fallon and Alex Woodward have been consistent performers and ‘the Movie Star’ James Stewart and Lachlan Boyd could be wildcards in the big one. Best on Ground prediction: Toby Greene.

Phil Crooks (TAC Cup Radio): Oakleigh Chargers 6 points. Been on a roll since R15 win against Power with some massive wins along the way, strong defence led by Tomlinson and Curran, scintillating midfield led by Tyson and Greene. Best on ground: Dom Tyson.

Jarrod Potter (Star News): Oakleigh Chargers by 15 points. Tyson, Viney, Greene and Wooffindin are potent midfield weapons which Sandringham will struggle to cover. On a similar note, Paine and Coleman have been dominant threats in the Dragons' forward line all season which will affect how Oakleigh structures up. With a little bit more pace in the legs, Oakleigh will take the TAC Cup. Best on Ground: Dom Tyson. He's a big game player and will step up again to back up the 30 or so touches he had against Dandenong and has impressed his way past Chad Wingard into being a likely third draftee for Greater Western Sydney.

Roy Ward (The Weekly): Sandringham by 31 points - The Dragons have the onballers to win a grind-out game. Their best players also seem to pop up at the right times but Oakleigh have surprised a lot of people in the finals and could score one more upset. If the Dragons win I would like to think Alex Woodward or Liam Sumner would be the players who get them over the line while if Oakleigh do cause an upset then Dom Tyson will be the man who powers their win.