Road To The Draft - Adam Tomlinson 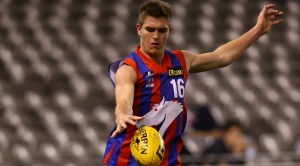 ADAM Tomlinson has had a very busy year but - thanks mainly to a cool demeanour and organised approach - has managed.

In 2011, the promising key-position prospect played with the Oakleigh Chargers in the TAC Cup, Vic Metro in the NAB AFL Under-18s Championships, Trinity Grammar in the AGSV competition and the AIS-AFL Academy Squad.

For a player with a lesser focus, it would be considered a daunting campaign.

But Tomlinson, despite his concentration being tested and durability stretched, took it in his stride, which (for a player standing 194cm and weighing 90 kg) is a big one.

He grew into one of the best tall prospects in this year's NAB AFL Draft, an athletic competitor capable of playing as a forward or defender. He has impressed clubs with his attitude, his character and his intent on making it as an AFL player.

"I take my footy very seriously and have my whole life," Tomlinson says. "I don’t see any game as a chance to muck around."

In many ways, Tomlinson is a purebred footballer. Since making the Victorian Under-12 team in 2005 (where he met best friend and fellow Oakleigh Charger and draft hopeful Dom Tyson) he has been through all the AFL's talent programs. He has made it to this point with barely a hitch.

A bleeding capsule in his bowel after an on-field collision ruled him out of Vic Metro's Under-16s championships, but it was perhaps the only hiccup in a steady progression. "I had no idea what was going on, it was the most pain I'd ever felt," he recalls

Tomlinson's greatest difficulty this season has been simple: trying to keep everybody happy.