Road To The Draft - Liam Sumner 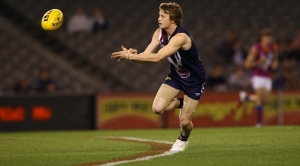 WHEN Liam Sumner was listed by the Sandringham Dragons for the 2010 season, he soon got sick of everyone telling him he was too small to forge an AFL career.

He was 16 years old, weighed 67kg and was heading into his first season in the TAC Cup as a bottom-aged player.

He'd missed out on making the representative side in under-14s while playing for St Paul's in the Moorabbin Saints junior football league, and had then only played about five minutes for the 'B' team in under-15s.

He knew something had to change if he was going to seriously pursue a future in football.

"I was a bit of a late grower and everyone else had shot up and the coach of the under-16s [Dragons squad] said I was just missing out but he still wanted me to come along," Sumner told AFL.com.au in the lead up to the NAB AFL Draft.

"Going into the Dragons, I kind of just missed out again. I was told I was too small and probably not quite up to the standard, and I went away from that thinking well, I just want to prove everyone wrong.

"I've been given those hints [that I'm not big enough] throughout my whole footy career, since I came up to the under-18s really."

Sumner, 178cm, was given his first chance by then-Dragons coach Dale Tapping (now Collingwood's midfield development coach) in round two of his bottom-age year, after impressing with his dedication at training.

Click HERE for the full article from afl.com.au's Jennifer Witham