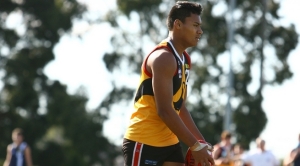 APPEARANCES can be deceiving - Dandenong North's Piva Wright will go into the AFL Draft on Thursday night blind to his chances of getting selected.

Despite a season in which the 18 year old won Vic Country selection and played in key forward and key defensive roles for Dandenong Stingrays, Wright has had little contact with AFL clubs.

But the advice of former Stingrays teammate turned Hawthorn player Mitch Hallahan has kept Wright calm about his chances.

"I was talking to him and he just said don't worry if clubs haven't spoken with you," Wright said. "Trust in them to pick you. It's all about being patient and believing it will happen. If it does happen it will be a dream come true."

The Hallam Senior College student, who finished his year 12 exams last week, said he hadn't spent much time worrying about the draft due to his exams.

But as the night draws closer he is starting to plan a way to watch the event without too much fanfare.

"I come from a very big family but I would prefer to watch it by myself," he said. "Most of my mates will be away at 'schoolies' - I think I will just lock myself away with one of my mates and watch it."

Wright, who has a Samoan background but was born and raised in Dandenong, is fully committed to a career as a footballer or if that fails to eventuate, he wants to be an English teacher, passing on his love for reading.

Again appearances can be deceiving as many people confuse him with a rugby player. "There is a Melbourne Storm academy at our school and they tell me to come over and play but my heart is in football," he said.

Click HERE to see the full article from The Weekly's Roy Ward.