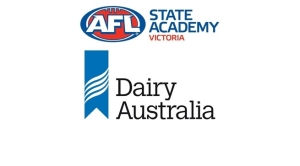 Dairy Australia has been announced as an official partner of AFL Victoria and the Victorian AFL State Academies.

As part of the new relationship, Dairy Australia’s 'Powered by Milk' logo will be featured on the back of AFL Victoria’s Metro and Country team guernseys at the NAB AFL U16 & U18 Championships.

AFL Victoria’s four Metro and Country AFL Academies have over a number of years offered talented TAC Cup competition players the best development experience that can be provided.

“For a number of years our AFL State Academies have helped develop the future stars of our game, with the likes of Jonathon Patton, Tom Scully and Dyson Heppell all having progressed through our Academy program over recent years.

“The partnership with Dairy Australian will help promote healthy habits which will have positive benefits now and in the years to come for these players,” Williams said.

Dairy Australia are pleased to be supporting AFL Victoria’s AFL State Academies, and hope the relationship will help educate participants about nutrition and the role of dairy foods in supporting health and physical activity.

“Milk naturally contains quality nutrients and there is mounting evidence that milk and dairy foods can play a role in sports nutrition and performance.

“Whether you are an elite athlete or a competitive amateur, milk and dairy can help you get the most out of your exercise or sport,”Dairy Australia dietitian Glenys Zucco said.

Most Australians need three serves of dairy foods every day to meet their nutrient needs. A glass of milk or tub of yogurt after exercise provides an ideal opportunity to meet one of these serves.

“Flavoured milk contains an ideal balance of fluid, carbohydrate and electrolytes to help refuel muscles and replenish what is lost in sweat.”

”Milk’s unique combination of whey and casein protein, which play an important role in muscle growth and repair, is another plus for active bodies”, Zucco said.

Hepner resumes with the organisation after 3 years in South Australia as the SANFL Strength and Conditioning Co-ordinator including roles with the AFL Academy- South Australia program and Port Adelaide Magpies FC, and three years as a part time/full time Sport Scientist with South Australia Sports Institute (SASI) where he worked in various sports including Rowing, Netball, Basketball, Hockey and Water Polo.