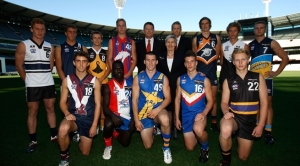 The launch at the MCG highlighted the strong partnership AFL Victoria has developed with the TAC throughout their 21 years of involvement as naming rights sponsor of the competition.

“It is fantastic to have such a supportive partner in the TAC who have been involved with the competition since its inception in 1992.

“The partnership supports a broader program that aims to develop and educate young players and prepare them for life on and off the field,” Mr Williams said.

All 12 current TAC Cup clubs were represented at the launch – double the amount of clubs that kicked off the competition back in 1992.

One player that participated in year one of the TAC Cup – and is still playing now in the AFL – is Essendon Champion, Dustin Fletcher who was in attendance at the launch of the 21st Season.

Victoria Premier the Hon. Ted Baillieu attended the event, launching the TAC’s new Speed Hurts TVC that will air this weekend with the start of the AFL football season.

Mr Baillieu made note of the damning road toll statistics that Victoria has polled in recent years.

“Young people in their first year of driving are about three times more likely to be killed or seriously injured than more experienced drivers.

“Every year about 75 young people between the ages of 16 and 25 are killed on Victorian roads, 60 of them men,” Mr Baillieu said.

It is for this reason that the TAC maintain their involvement in this Under 18 State Competition.

This year also marks the beginning of a new era for AFL Victoria’s TAC Cup competition as it is re-branded to the message “Speed Hurts” – a change that is in line with the TAC’s goal of making speeding socially unacceptable.

TAC CEO Janet Dore said speed remained one of the biggest killers on Victorian roads, with about 30 per cent of all fatal collisions having speed as a major contributing factor.

“The TAC Cup does make a difference to the number of young people killed and seriously injured on our roads,” Ms Dore said.

The TAC Cup competition begins this weekend with the Metro Round on Sunday 25th March which will see three games being played at Visy Park in Carlton.