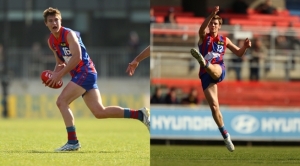 Round 1 of the AFL Home & Away Season saw the Swans make a large claim on bragging rights in NSW. However, Greater Western Sydney didn’t leave the contest empty handed.

GWS took the opportunity to demonstrate to the competition that they are going to be a fierce contender within the AFL in future years.

Made up of 9 TAC Cup players from 2010 & 2011, the GWS team debuted standing tall and facing the adversity without backing down.

Several Giants players made a name for themselves on Saturday night; Tomas Bugg from Gippsland Power and Toby Greene from the Oakleigh Chargers both amassed 27 disposals, laying 4 and 5 tackles respectively. The pressure they applied and the influence they had on the game was extremely impressive for AFL debuts.

Adam Kennedy, formerly a Western Jet, put forward a solid performance against the Swans with 17 kicks, 11 handballs, 11 marks and 2 tackles. Kennedy was drafted to GWS in 2011 after being overlooked in 2010. He has matured into a terrific asset for the Club and will be one to watch in future rounds.

Will Hoskin-Elliott, pick number 4 for GWS in the 2011 Draft, showed his athleticism on the weekend by using his breakaway speed to kick one of the Club’s 5 goals for the game.

See a detailed list of past TAC Cup players that competed on the weekend and their statistics;