Chargers Win In First Round 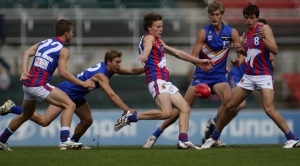 The loss of nine players to the 2011 AFL draft proved a surmountable challenge for the Oakleigh Chargers in the opening “Metro” round of the TAC Cup, as they prevailed comfortably over an inexperienced Eastern Ranges side as Catherine Durkin reports.

Oakleigh’s Jay Kennedy-Harris kicked the opening goal, after a frenetic and intense opening four-minutes. It was to be the first of four goals for Kennedy-Harris, who was instrumental, providing a handy lead-up option for the Chargers’ in their forward-line.

From then on, the Chargers stamped their dominance. Oakleigh’s ability to effectively link up across the halfback line through the likes of Luke McDonald and Jordan Collopy, made forward penetration and effective conversion difficult for the Ranges, while strong ruck work from Chris Prowse allowed Oakleigh to control the clearances.

This remained the case for much of the first half, until a late onslaught from the Ranges in the dying minutes of the second quarter. Goals to Nathan Mill, Mitchell Honeychurch and Jackson McDonald reduced a 40-point deficit to a mere three goals going into halftime.

The Ranges’ momentum continued in the third-quarter, with Honeychurch dominating possession. But wasted scoring shots marred any possibility of a resurgence, as they went on to kick 1.7 to the Chargers’ 5.2.

Although the Ranges were competitive throughout, their inability to grasp the opportunities that came their way became a telling reminder of the side’s youth.

Despite feeling disappointed by the loss, Ranges’ Coach, Darren Bewick still felt there was a lot to be taken from his team’s performance.

“It’s not a great way to start a season, with the result, but the boys will learn a lot and I think we’ve got a lot out of it,” Bewick said.

“We had nine guys playing their first game and a majority of bottom age boys playing. To be down eight goals at three-quarter-time and to bring it back to four goals, we’re actually pleased with that. (But) to give them 10-15 minute lapse here and there and not nail our opportunities probably cost us.”

“I thought today that the use of our hands and our run and our speed were really, really positive.

“Our preparation has been really strong and we’re really pleased that we got the opportunity to play here and against some good opposition.”

Wenke was pleased with their defensive game, which had been made a focus by coaching staff in the preseason.

“We’ve been really innovative this year, with what we call team defense, which is not only the individual but also the team. We think we stuck some really good tackles today and we certainly put a lot of pressure on the opposition. That’s something that we want to be known for.”

Oakleigh this weekend return to Visy Park on Sunday to take on the Western Jets, whilst the Ranges also return to Visy, against the Northern Knights.