Knights Get Points Over Ranges 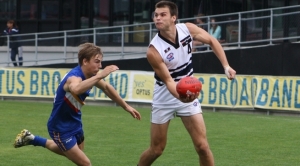 After scrappy and contested footy, where neither side was able to stamp home an advantage, the Northern Knights pulled away after half time to run out eventual winners by 57 points as Davis Harrigan reports.

Knights tall forward Cameron Conlon bagged five straight goals, while Thomas Boyd from the Ranges snared six. Players such as Nathan Hrovat and Jacob Ballard stood out for the Knights, as well as smaller players Ben Cavarra and Mitchell Honeychurch from the Ranges. However, a shadow loomed over the Ranges from late in the first quarter, as Jack Edwards crumbled in an attempt to take a mark in the Ranges forward line. He was taken off the ground by stretcher. Later reports suspect Edwards injured his ACL.

The pressure exerted by both sides was high, with clearances difficult, and the lead changing several times before the Knights pulled away to have twenty points of breathing space at the long break. The Ranges game tapered off after the break, the Knights booting nine goals to three in the second half, dominating at the stoppages and pushing the ball clear of the packs.

A very satisfied Knights coach, Anthony Allen, commented that “our kicking possibly let us down, we could have kicked better for goal” and “improving the ball usage” was noted during Sunday’s game.

It was a far more subdued atmosphere in the Ranges rooms. Coach Darren Bewick, speaking post-match, highlighted that winning the ball and being able to compete was something he wanted out of the players, and that didn’t show against the Knights. “Having the talent and ability is great,” he said, “but if you can’t move the ball, then it makes it very difficult to score. They need to remember that they are on show on the field, and whatever the result, they have to compete to the best of their ability.”

After two early losses to start the season, the Ranges will be looking to grab a win against the Western Jets in Craigieburn, while the Knights head to Wangaratta to face the Murray Bushrangers.