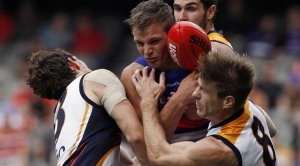 Four players from the 2011 TAC Cup competition made their AFL debuts over the weekend.

Clay Smith debuted for the Western Bulldogs in what seemed to be a fairy tale entrance into the competition, but without the cheerful ending. Smith kicked three goals in the second term and a fourth in the third term before being subbed off due to cramp.

The Bulldogs selected Smith with their first pick at no. 17 in the 2011 draft. This decision appears to be paying off for the Club, with the 18 year old emerging as a readymade footballer.

Jackson Paine made his debut for the Collingwood Football Club on Friday evening. Jackson was a key position player for Sandringham Dragons in their Premiership last year and has demonstrated that he will not be taking a backwards step in his debut year in the AFL. Paine kicked 1 goal 1 and had 6 disposals, 3 marks and 3 contested possessions.

Past Gippsland Power player, Josh Tynan made his first AFL appearance for Melbourne over the weekend. Tynan amassed 14 disposals and 8 contested possessions. He is an athletic and poised player that will no doubt improve in the competition as his body matures and builds up strength.

Brandon Ellis from the Calder Cannons made his debut for Richmond after performing very well in the NAB Cup competition. Ellis has demonstrated his maturity for an 18 year old, being entrusted with kick-in duties at certain times during the game. His disposal efficiency was rated at 88.89%, ranked one of the highest for his team.

Round 2 will bring upon another challenge for all of these players and hopefully the debut of more 2011 TAC Cup players.