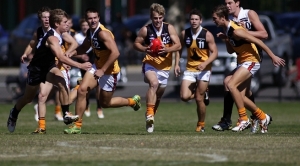 The Dandenong Southern Stingrays have put their first win on the board by scorching the North Ballarat Rebels on a beautiful sunny day in Bendigo.

The contest started slowly, with neither team scoring a goal until the 7 minute mark of the first term. Once the scoring seal was broken, each side went goal for goal.

North Ballarat finished the quarter 8 points up after applying strong pressure and controlling a lot of the play. However, this would be the only quarter they that win.

The second term saw some tough football with both teams taking courageous marks and delivering some hard hits. Dandenong were able to convert second efforts into goals further down the field. However, their sloppy defence let them down at stages providing the Rebels with the opportunity to score.

It was after the half time break that the Stingrays stamped their authority on the game, winning the clearances, stoppages and contested possessions.

“Everyone is vulnerable to pressure. Get under their skin and they will make mistakes.

“The effort required in this quarter is massive. I asked for a 100 minute effort from you at the start of the day and no less will get the job done. This is our opportunity to win our first game, don’t let it slip,” Yeats said.

The Stingrays went on to kick 4 unanswered goals in the fourth and showed confidence that should benefit them in future rounds.

Jake Calvert was impressive with 23 disposals, 11 hit-outs and 2 goals for the Dandenong Stingrays. He was supported by McGenniss and McCartney who kicked a pair each as well.

As this was a split round, both teams have next weekend off. Round 5 will see the Dandenong Stingrays take on the Western Jets and the Northern Ballarat Rebels challenge the Eastern Ranges.