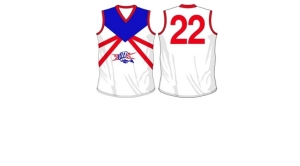 Loy Yang B Gippsland Power went to Bendigo for their round three TAC Cup match and came away with a comprehensive victory over the highly rated Pioneers side. The Bendigo team had been impressive in their opening two games and were justifiably confident that they would test the Power’s resolve. The Power was strengthened by the return of key defenders Kaine Allen and James Huts while Paul Pattison and Jayden Steers were selected for their first games this season. On a negative front, Simon Deery missed due to a shoulder injury but it appeared that he won’t miss too many more.

It was the Pioneers who opened the scoring early in the first term and this was to become a pattern at the start of each quarter during the match. Due to some good work by Nick Graham, Tom Muir replied with a clever goal from deep in the forward pocket but the Power were not making good use of their scoring opportunities. Later in the term, Shannen Lange kicked the second after a fifty metre penalty but the Pioneers hit back after a soft free kick.

With the pressure being applied by the Pioneers, the Power upped the ante as Nat Paredes went long into attack from the centre bounce and Josh Scott kicked a vital goal. Paul Pattison worked hard to set up Matt Northe who marked well and kicked the side’s fourth for the term. Not to be outdone Graham again showed some class and found Muir who kicked his second for the quarter. By the first change the Power led by 22 points and had put the Pioneers on the back foot with their ferocious tackling all over the ground.

As predicted the Pioneers kicked the first goal of the quarter and it took some strong marks by Jack Johnstone and Graham for the Power to reply to the Pioneers initial forward foray. As if the Power were not already aware that they were facing a highly competitive Pioneers side, the local boys kicked the next two goals to put themselves back in the game. From deep in defence, Josh Cashman and Daniel Jackson went long and direct and Muir again was the focus of attention with his third of the match. Some good, scrambly play by Lachie Channing and Northe allowed Aaron Heppell to goal and the Power went to the long break 23 points up.

During the long break the Power were made well aware of the challenge that they faced in terms of the Pioneers work rate and skills and went into the third term with a lot of hard work to do. Yet again the Pioneers goaled first to reinforce the need for the Power to be at their best and, from the resultant centre bounce, they went long and direct through Tom Fusinato and Will Hams to allow Anthony Tipungwuti to reply for the Power. As if on a roll, the Power went into attack from the bounce and Scott kicked his second from a free kick.

Mid way through the quarter, the Pioneers kicked another but it was the last goal of the term. Both sides tightened up defensively and it became a battle of wills as they kept each other under pressure all over the ground. By the end of the quarter the Power led by 20 points but hadn’t stemmed the Pioneers willingness to stay in the match with their impressive willingness to work hard. By the last change fitness was going to be a key issue and the Power had shown already this season that they were impressive in this area.

Nick Stevens laid down some stern challenges for the Power based on their work rate and willingness to apply intense pressure in any contested issues. It was as if the Pioneers got the same message as they again kicked the first of the quarter. Faced with such a challenge, the Power went into overdrive and, more good work by Johnstone and Hams, saw Northe do it again and it was obvious that the team had responded well to Nick’s challenges.

Once again they went into attack and some clever work by Scott set up Tipungwuti who created another great goal. Scott was the target of the Power attacking forays and charged a pack to create a chance for Graham who snapped truly. Darcy Irwin was the next to be creative as he went long into attack and Pattison snapped another fine goal from what appeared to be half a chance.

Jack Johnstone initiated another piece of forward play as he combined cleverly with Muir to set up Northe for his third for the match. Not to be shown up by his team mates, Scott again used quick hands to telling effect with Tom Fusinato given the chance to join the goal kickers. In the dying minutes Muir was given a chance for his fourth after a free kick and fifty metre penalty and he finished it off accurately.

By the final siren the Power had extended the margin 58 points with a stunning display of intense, team oriented pressure where their fitness allowed them to up their work rate to a level that the Pioneers couldn’t match. The fact that the Power went into their forward fifty sixteen times to Bendigo’s seven illustrates part of their dominance of the term but, their thirty plus tackles, including nine inside fifty, really shows how hard they worked.

To further illustrate the Power’s willingness to work hard under pressure, an injury to their ruckman Jack Leslie put extra pressure on the taller Power players as they moved around to reply to the challenges that his absence created. With the game up for grabs in the last term, players like Jayden Steers, James Huts and Tom Muir took on extra responsibility and helped the side to step up to the challenges involved.

Tom Muir started in a key forward position and was pivotal in the side’s early dominance over the Pioneers. Later in the game he changed his role but the work rate stayed the same as did his impact on the result of the match. His aerial skills and long and accurate kicking were on clear display in a fine game. Stand in captain Jack Johnstone again led by stellar example with another all round effort either in defence or as an on-baller. He consistently won the hard ball but then worked even harder to use these possessions to a telling effect. He seems to be relishing the extra responsibility that his role involves.

Forward Matt Northe again displayed a willingness to work hard in the key, pressure contests. He won many contested balls but had the ability to then feed the ball off to team mates quickly and with stunning accuracy. His work rate so far this season has been a critical factor in the teams overall success. Key forward Josh Scott has been thrown a stern challenge due to Tim Membrey’s absence and Simon Deery’s injury. He has responded manfully and once again was the target for many of the side’s attacking moves. He not only kicked goals, but, importantly, set up others with a great work rate.

Mid-fielder Will Hams is another whose work rate under pressure has been impressive and, in this match, he took it up a notch when the side needed it most. He kept intense pressure on opponents but won many possessions for himself and then used them effective all day. On-baller Nate Paredes is another whose work rate under pressure had become important for the team. He won many hard ball contests but then used long and direct kicking to telling effect. Aaron Heppell is another youngster whose ability to lift to physical challenges is impressive and he again applied himself to the teams benefit throughout the game. His intense tackling was a key ingredient of his impact on the match.

Nick Stevens was delighted with his side’s response to his three-quarter time challenges and praised the boys for their ability to work so hard at the end of a tough game. He also said that there were still some areas that they have to work on in terms of following some of the key team rules. No doubt he will continue to push them to do the right job for the full game, but, their ability to finish off games has been impressive and gives them a tremendous advantage over other sides at this stage of the season