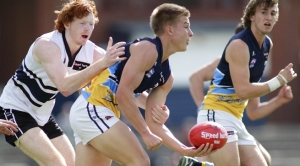 Bendigo Pioneers have secured their second win of the season with a blistering 100-point victory over an inexperienced Northern Knights, reports Maddie Wines.

Northern’s Cameron Conlon kicked the opening goal of the game however Bendigo were quick to reply through forward Jake Stringer. Stringer, who was instrumental in the game, went on to kick a further eight goals, providing the midfield with a strong marking target up forward.

From then on Bendigo took charge of the game. Their ability to win the contested possession proved detrimental for Northern. Hard running and strong marking from Bendigo’s backline, led by Isaiah Miller and Ben Lester meant Northern went goalless during the second term.

The third quarter saw Bendigo’s Christian Burgess kick two in a mere two minutes while Billy McInnes added another goal to take his total to three for the day. Northern looked more promising in the third quarter, intensifying their defensive pressure with Anthony Bonaddio slotting his first.

However the Pioneers’ momentum proved simply unstoppable as they continued to dominate possession of the football over a young Northern outfit. Midfielder Josh Turner was exceptional for Northern, despite being bottom-age, racking up an impressive 31 possessions for the day.

Although Knights coach Anthony Allen was disappointed with the loss he still felt that there were positives to take away from the game.

“We have been building to hopefully get a really good win like that so it was a very good result,” says Newett.

“The boys worked really hard and they stuck to the game plan and they wanted to redeem themselves from two weeks ago where we dropped away and I think we achieved that today.”

However despite the enormous margin, Newett still believes there is work to be done.

“I still think we have some room for improvement with our decision making but today was probably the most we have ran and got guys involved, linking up some plays which is really pleasing. Now if we can finish off with our inside 5o work, if we can become more efficient at that, that is obviously going to help,” said Newett.

This weekend Bendigo will host the Calder Cannons in Moama on Saturday while the Knights will travel to Eureka Stadium on Sunday to take on the North Ballarat Rebels.