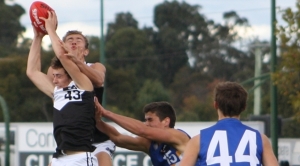 Still seeking their first win of the season, it wasn’t to be for the Eastern Ranges against North Ballarat. A superb five goal haul to North Ballarat Rebels young gun Michael Close sealed a 69 point victory for the Rebels, at Box Hill City Oval, 115-46 as Davis Harrigan reports.

There was almost nothing in it in the first half. The scoreboard was not an accurate reflection of the pressure that was exerted by both sides. The Rebels held a twenty four point lead into the main break. Before that, it was goal for goal, with the Rebels only pulling away nearing the end of the first term. North Ballarat’s Jaydon Stiles started the second quarter in fine style, grabbing a great mark in front of goal, slotting his first of two for the day. Close was dominant around the forward line, able to present as a target for delivery from the midfielders. Close was ably supported by Styles and Dallas Willsmore, whilst Matt Crouch’s outstanding ball work around the ground earned him thirty four touches and three goals working out of the centre.

For the Ranges inexperienced and very youthful side, Mitchell Honeychurch and Scott McGowan showed real promise up forward, each slotting two goals. Ben Cavarra and Brandon Wood also showed they could take it up to the more experienced Rebels, each booting one major.

After five matches, the Ranges still sit at the bottom of the ladder. However, this energetic side, which comprises a large number of sixteen year olds, were able to compete with the Rebels for the majority of the first half, before the Rebels kicked ten goals to four in the second half.

With three wins under their belts, Rebels coach David Loader was enthusiastic about the win, but also emphasised that endeavour was what he wanted to see the boys presenting each week on the field.

“Every week, I just want the boys to have a crack. If we lose, but we’ve played a great contested game, then I will be pleased. We don’t have some of the numbers like the Melbourne based sides, we’re not as skilled as them…if you don’t give everything you’ve got, you do get beaten.”

Over in the Ranges rooms, defensive coach Tom Humphries praised the effort of the young back line. Humphries sees the first-year players gaining experience to become part of the future core group.

“We were able to compete for a lot longer today. We did so in the second half…unfortunately with no real result on the scoreboard. Jordie Williams, and Matthew Collins, in his first game, were standouts. There were some silly errors, but they tried hard, and that’s good from a coaching perspective.”

This week, the Ranges tackle the Murray Bushrangers at Box Hill, while the Rebels also look forward to a home game against the Northern Knights.