Cannons Run Away From Pioneers 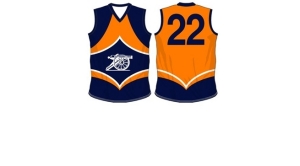 A remarkable eight-goal last quarter by the Calder Cannons saw them come from behind to outrun the Bendigo Pioneers at Moama Recreation Reserve reports Maddie Wines.

Calder’s Jordan Maddern scored the first goal of the day, the result of a 50-metre penalty paid against Pioneers’ Jake Stringer for undisciplined behavior. While the Cannons made the most of their opportunities inside fifty the Pioneers struggled to find a strong marking target up forward. It wasn’t until the 14 minute mark of the first quarter that Bendigo, through forward Billy McInnes, scored.

A momentum shift in favor of the Pioneers enabled them to claw their way back and lead at the first break by eight-points.

The second quarter saw another even contest. Both sides applied fierce tackling and heavy pressure. A collision between Pioneer player Jesse Collins and the goal post resulted in him having to leave the ground mid way through the second term. Pioneer Joel Donohue was then switched to the backline, a move that paid off for Bendigo. But Calder through the likes of Jono O’Rourke and Rory Atkins displayed tremendous pace and effective ball carry through the midfield resulting in them leading by one-point at the main break.

The Pioneers took charge of the third quarter dominating possessions and clearances. Pioneer forward Jake Stringer was able to slot two in a row. However Calder answered back through Essendon father-son prospect Joe Daniher. At the last break the Pioneers lead by sixteen-points.

The last quarter saw the Calder Cannons leave the Pioneers in their wake, stacking on an impressive eight goals to Bendigo’s mere one.

Calder dominated the clearances out of the middle, driving the ball forward at every opportunity. Andrew Gallucci, Nick Fletcher, Joe Daniher and Billy Morrison were all multiple goal scorers for Calder.

The Cannons ran out winners by 34-points.

“We started being able to dictate terms a lot more than Bendigo had allowed us to do in the previous three quarters.”

“I think nine goals to one is not what we expected but you know it was great to watch and I think it was valuable for our blokes to get an understanding that we need to be improving those areas, [so] we can compete with good teams like Bendigo,” Allison said.

“[Calder] were a quality outfit that were able to step up in that last quarter and we just couldn’t get our hands on the ball and when they got a run on we just got overwhelmed.”

This week the Calder Cannons will take on the Geelong Falcons while the Bendigo Pioneers will travel to Shepparton for their clash with the Murray Bushrangers.